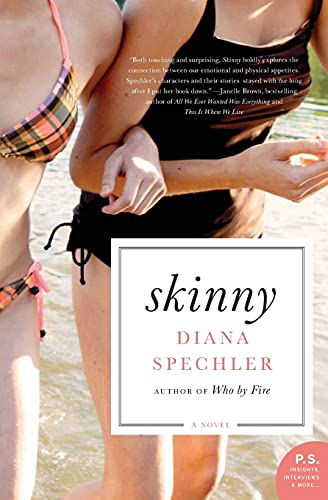 Skinny, by Diana Spechler is as divine, decadent, and sumptuous as a gourmet dessert. I suspect this is one novel that will be found on many beaches, and in the hands of many at the cottage this summer. Skinny is absolutely delicious, smart, and funny.

Skinny is a unique story inspired by the author’s summer stint at a children’s weight loss camp. This is a work of creative nonfiction that is entirely enjoyable and humorous. It takes a serious jumping off point and an austere subject— health issues, both physical and mental, relating to childhood obesity—and it spins that off into a tongue in cheek, almost satirical look at an industry that is perhaps out of control.

It is a savvy title that can at once refer to the weight loss industry itself and “the skinny” or truth at the heart of the relationships people have with food. It might also refer to the real skinny on the odd personalities that are front and center leading the so-called weight loss revolution in a country such as the United States, where everything is supersized and Coca Cola is sold in high school cafeterias.

As the novel begins, Gray, 26, is dealing with deep grief and guilt. Her very obese father has recently died. “After I killed my father, he taught me that honesty is optional,” she states. In the wake of his death she finds that she is unable to stop eating. Gray is clearly not an overweight character but, she does have unhealthy eating habits.

Her bingeing increases and her waist expands as she is unable to process her feelings about the death. Her growing appetite clearly is fueled by her psychological struggle. One day, as Gray hunts through her father’s financial papers and emails, she finds evidence she has a half sister. Gray researches the sister online and finds so many similarities between her and her half sister that she is motivated to get to know more about the girl, Eden, who also struggles with weight. Eden’s private life is quite exposed through social media and so Gray already thinks she knows a lot about her half sister when she signs on as a camp counselor at the weight loss camp Eden is attending.

Ms. Spechler notes at the end of Skinny that the novel’s characters are largely composites, which shouldn’t be surprising as these characters are much too funny, ironic, and colorful to be entirely real. Take Lewis, for instance. Lewis is the camp founder who, without spoiling the ending of the book, is slightly hypocritical and completely full of himself. He is a full blown narcissist who takes $11,000 per child for a summer that promises to transform children from overweight, bullied victims to svelte, healthy members of society. And yet, he has his own secrets.

Sheena is the very comical former foster child from the wrong side of the tracks who ascends to activities coordinator and wins the love of all the campers. She is also slightly deranged. Mikey is Gray’s moody boyfriend back home; and Bennett is the well sculpted summer fling, an assistant at the camp.

Ms. Spechler is a talented writer effortlessly moving between flashback type scenes and present day. In fact this handy a use of the scene shifting device has not worked so successfully since Seinfeld’s brilliant backwards episode. She writes with skill and expertise, and the flow of the narrative is never strained despite the jumps back and forth in time. Her flashbacks are so organic that the reader hardly knows they are happening and isn’t ever jolted. Ms. Spechler is also the author of Who By Fire. She lives in New York City and her writing has appeared in the New York Times, GQ, Details, Never, and Glimmer.

Skinny is contemporary in its topic matter and cultural references and somewhat horrifying in its harsh look at the obesity industry. If even a portion of this story is true, as the author says it is, Skinny will be slightly horrifying for a whole group of parents that spend money sending their children to overnight camps. In fact this book should also come with a disclaimer stating if you are raising a child with food allergies: Proceed with caution.