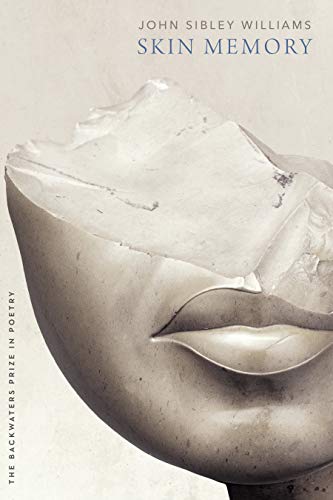 “John Sibley Williams’ poetry gives us hope we can, indeed, get out of the way, if only for the moment through the poet’s words and voice, in short, his song.”

Skin Memory begins by reminding us to listen, to be attentive: “To how choreographed our forgetting. To the dark little narratives of this is mine/yours, . . .” Listening is crucial to Sibley William’s poetic universe because it leads where all great poetry leads—to the unsayable, to the complicated human experience that lies beyond language: “Because skin has a memory all its own and because memory is a language that’s survived its skin.” The realm of John Sibley Williams’ fourth book of poetry lies in that ineffable memory of skin, a place both of the body and not of the body.

In the collection’s second poem, “Snake. Tree. Rope. Wall.” we learn to “see with our hands”:

“I know groping for names

takes the form of prayer

for some people while others

engineer new dreams from the blindness.”

Whatever choice we make, we see through a glass darkly. However, rather than bemoaning our inability to see the “truth,” Sibley Williams’ poetry explores the possibilities of alternative sight, allowing for other, perhaps deeper, ways of being in the world. That elephant we grope for blindly can be so much more:

“Not everything begins all at once

with elephant. Not everything ends

once the details decide on a context.”

The many haunting, nuanced, and formalistically varied poems in Skin Memory provide a plethora of “contexts” for us to “see” in. Along the way, Sibley Williams weaves in moments in the relationship between fathers and sons, as in the poignant “Father as a Papercut” or this moment from “Absence Makes the Heart.”

“My son has not yet found a reason to

love or hate the silence following

In other poems, his gaze opens to the implications of our smallness in the universe and why we seem so afraid of that smallness, as in this excerpt from “Hekla (Revised).”

dies for long is a story we tell ourselves

to make the earth easier to sing, to

convince the earth we may have once

added something to it.”

More often than not, though, Sibley Williams returns again and again to his central theme of the multiplicity of selves, or perhaps, rather, the porousness of the self, as in “Spectral,”

on a field’s edge, closer, so close it

dissolves in my hands”

Or in this moment from “It Was a Golden Age of Monsters” when the narrator moves through memory, reflecting on a time when as a child he read about bison in the American West. Later, when his father drives him to the hospital, he returns to the memory of those bison:

“I will be thinking about bison,

Blood on the page, not the pillow. The road

that curls home seems to erase itself.

And the steam coming off it, frail as breath.”

Images of steam and fog return again and again in the collection to remind us we never see clearly, but always through a glass darkly. The past exists here in the present with us, if only we could lift the veil. However, unlike in Corinthians and later in St. Augustine, it is not God we fail to see clearly but ourselves.

“Once I saw a carnage of blackbirds

pecking straw from the head of a scarecrow

wearing my shirt, and for a moment I saw myself

again, beautiful in them.”

Skin Memory’s precise and mercurial poems remind us we are not here alone. That porousness of self allows us access to all things: birds, rocks, trees, and each other. The central question of Sibley Williams prodigious poetic gifts seems to be how to access those other selves, both within us and without. He gives one possible answer through the very act of asking the question so clearly in “Everything Must Belong Somewhere,”

“How to sing them? To get out of the way

and let things sing through us?”

John Sibley Williams’ poetry gives us hope we can, indeed, get out of the way, if only for the moment through the poet’s words and voice, in short, his song.