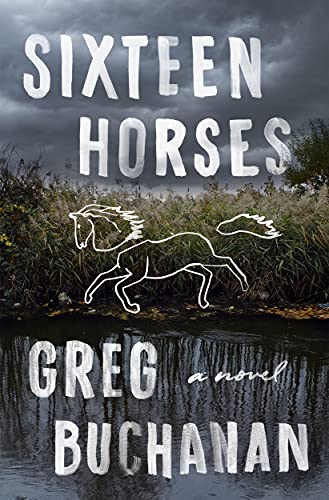 “A powerful story encased in an even more powerful narration in which love and cruelty rise, intermingle, and become the same.”

In the village of Ilmarsh, 16-year-old Rachel Cole discovers a gruesome sight while walking her dog in one of her family’s meadows.

“Sixteen submerged heads, all apart, all with only the barest strand of skin on display, all with a single eye left exposed to the sun.”

Police detective Alec Nichols is called to the scene and is unprepared for the sight. In a short while, other officials join him, among them veterinary pathologist Cooper Allen.

Cooper verifies that the heads are of sixteen horses. The animals belong to various residents of Ilmarsh, and most were stabled at Elton’s Riding Academy and Livery. Several others were independents, like Michael Stafford’s Annie, who pulled a carriage at the local seaside arcade. All the animals had been sedated at the request of their owners because of the Guy Fawkes celebration and fireworks.

No one had reported any of the horses missing.

Investigation reveals a large number of pets have also disappeared. “A number of dead birds were discovered in the night. We found copies of a letter in their beaks. Folded down their throats, wrapped in plastic.”

Crates are discovered in the woods. Penned inside each is a dog, starved to death.

The number 16 crops up again and again.

“Alec looked up a number on the internet. He wanted to find out what it could mean, even if it was crazy, even if it turned out to be useless. He tried to find the meaning of sixteen.”

There are many clues and many suspects, but none produce the guilty one.

People begin dying, egged on by conscience or memories of other crimes. There are suicides and disappearances. Anonymous letters are received. Emails sent to absent parents come back with mysterious, ambivalent replies.

The investigating officers and other personnel fall ill. Anthrax bacillus spores had been placed around the horses’ heads. One of those infected is Alex, who crashes his car in a delirium. His son Simon is with him but when the ambulance arrives, Simon is gone.

All that’s found of the boy is a severed finger in the grass.

Cooper is unharmed, and when Alex dismisses himself from the hospital, the two go on with their investigation, but now it’s a private one. Alec is looking for Simon. Cooper is there to make certain he doesn’t have a relapse.

They return to the meadow and the woods where it all began. There, they will find the answer to everything, and it will be nothing anyone expected.

This novel should begin with a caveat to the reader: “Do not begin this book while in a negative frame of mind. To do otherwise may result in severe depression.” Especially if the reader is an animal-lover.

Though the plot of the story may seem to be about solving the crime of 16 mutilated horses, each chapter, with a few sentences about the investigation, immediately digresses into an in-depth dissection, either prominently or peripherally, of the various characters’ lives and mental processes. Their wrong life-choices, mistakes, and regrets are carefully enumerated and at great length reiterated and agonizingly reviewed.

There are so many characters being made to look guilty, and several of those opting for self-destruction—with a paragraph or several sentences about the investigation, that by the explanatory climax, it’s difficult to connect everything together. By that time, the reader will be so emotionally exhausted, the identities of the actual perpetrators seems inconsequential.

The very sensitive reader will no doubt be shaken by the fate of the animals in the story, and that fact may cause a good many of them to leave the narration unfinished, opting for something lighter and perhaps less assaulting on the emotions.

Sixteen Horses is a powerful story encased in an even more powerful narration, in which love and cruelty rise, intermingle, and become the same, but by doing so, mostly overwhelms the essentials of the plot.

It is an absolutely poignant and eerie debut novel.