Six Weeks to Live: A Novel 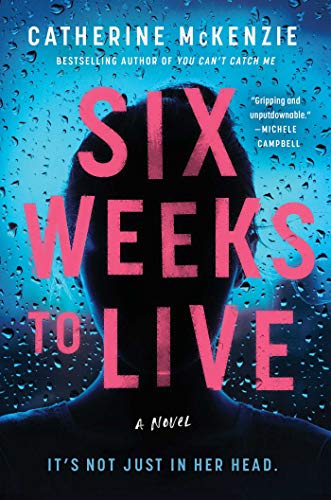 What would you do if feeling unwell your doctor reported, "I'm sorry to have to tell you this, Jennifer, but you have a primary glioblastoma in your brain."?

What's more, it is determined she only has six weeks to live. Forty-eight-year-old Jennifer is stunned when she receives this diagnosis and learns nothing can be done. Armed with tons of prescriptions for swelling in her brain, pain, and insomnia, she now needs to get her life in order, but where does she start?

When she also discovers blood tests show a high level of lead in her system which has been the case for about a long time, she wonders if her estranged husband, Jake is trying to kill her because she won't give him a divorce.

Separated for more than a year after Jennifer's discovery of Jake's having an affair with a woman not much older than her triplet daughters, she's not too anxious to give in to his wishes. But would he stoop so low as to try to do away with her, so he can marry his new love interest?

Her girls, identical twins Aline and Miranda along with Emily finds it hard to process this news. Emily, a medical student is married and has twin sons she adores, but she immediately takes her mom under her wing, wanting to help in any way, yet she refuses to believe her cheating dad would do something so dastardly.

Miranda, who can't seem to settle down and decide what to do with her life, starts to become overly concerned with Jennifer and moves in with her, whereas Aline, who is a researcher takes everything off the cuff. At odds with her mother for a long time, she is ambivalent about the whole situation, and both she and Miranda determine Jennifer's wild accusations about their father is a symptom of her cancer. They consider him a scoundrel, but he would never hurt their mom.

Jennifer is determined to ascertain who poisoned her making it her mission as the last thing she does before she succumbs to her illness. Who can she trust?

As things escalate between Jennifer and Jake, the daughters cannot grasp everything. There have been too many secrets over the years and some of them are now being discovered. When the children were young, they were sent to live with their grandparents after being told their mother was ill. They believed she had cancer, but it now comes to light she was in a mental institution. Why the big secret?

The girls had become somewhat of celebrities due to being triplets, yet one of them is not identical. They were paraded around like circus monkeys, in some TV shows and getting special treatment, which they did not enjoy. This brings up a lot of memories and resentments, and they wonder if their notoriety caused Jennifer's being institutionalized. Long-held feelings are exposed along with anger, yet they are sisters and must stick together while they rally around their mom.

When it's discolosed Jake's lover is pregnant, it becomes all too clear to Jennifer why he is anxious for the divorce. Then they learn Jake has paid off a huge debt for Miranda, they wonder why she moves in with their mother suddenly. Is she spying on her for Jake? Is she doing something to precipitate her death? Her suspicions have Aline remembering back to when everything started:

"What was the precipitating event? When did Jennifer become the enemy that needed to be destroyed? Was it Jake's affair and the fallout from that? No. Aline didn't blame her mother for that, and she couldn't believe that Miranda did either, though Aline wished sometimes that Jennifer had taken it [the split] better. That there was some way the family could have remained intact, even if it were only for the holidays Aline was surprisingly sentimental about.

"No. It went back much further than that.

"She should be able to figure this out. She and Miranda were the same person in so many ways; there wasn't anyone Aline knew better, not even Emily. She knew Emily felt left out sometimes. But she and Miranda were a unit. Only a group of cells, one set of DNA. What had happened in their life to make it possible for Aline to believe that Miranda could have done this?"

As more secrets are divulged, tensions rise as well as distrust of each other. Before long, Jennifer's daughters decide to placate her by playing along trying to find the culprit who wants to kill her. But what they learn only offers more questions.

Jennifer tells her story in separate chapters in her own voice and in the first person whereas her girls offer their perspective in other chapters in the third person, so this is written somewhat like a memoir. The twists and turns in the plot keep the action moving quickly and offers a lot of psychological suspense. The reader is kept guessing up to the shocking end wondering if Jennifer is suffering delusions from her cancer or if someone in fact looking to cause her death. Sinister, tragic, and captivating, Six Weeks to Live is sure to raise one's hackles.