The Six Swans by the Brothers Grimm 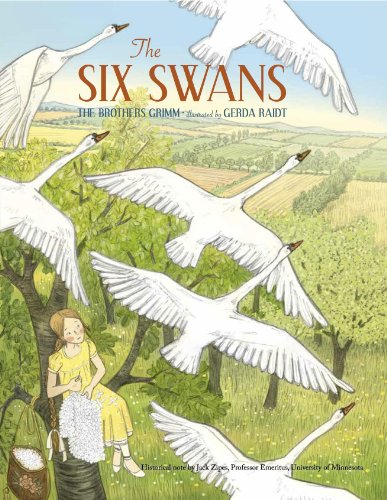 “The Six Swans will inspire many young readers and caring adults who crave tales highlighting heroic females who do not resort to violence to save the day.”

With its bracing plot featuring a valiant, strong-willed girl who breaks the spell that transformed her brothers into swans, the Brothers Grimm shaped a fairy tale strange and potent enough to lure a contemporary audience.

In fairy-tale fashion, the story plays out in the landscape of a widowed father and children cursed or left to their own devices. The narrative opens in a great forest, where the king, chasing a deer, strays from his companions and cannot find his way out. An old woman who approaches him turns out to be a witch. She will show him the way only if he will agree to marry her beautiful daughter.

Fear compels the king to agree to this condition, but troubles loom. When he meets the young woman, he does not fall in love with her despite her beauty; in fact, he “could not look at her without a secret sense of horror.”

Readers, too, will distrust the new queen, depicted by Ms. Raidt with haughty posture, a callous expression, and ice-blue gowns. Some will likely agree with the king’s peculiar decision to shield his six sons and one daughter from the stepmother by taking them to live in a lonely castle hidden so deeply in a forest that the king must use a magic ball of string to find the path leading to it.

A cheerful double-page spread depicts a leafy, bucolic scene there, with the kinder scampering, fishing, or swinging on a tree. In the background, we see their secret home, a pale three-story abode with a slate-gray roof, resembling a grand chateau of the Loire Valley rather than a German schloss.

The illustrator’s other somewhat puzzling choices include her image of the children’s badminton rackets, which have been traced to British military officers serving in British India in the mid-1800s. And one cannot help but wonder why the daughter, in her high-waisted dress, and the sons in their sailor whites look so Edwardian.

Often, too, the colored-pencil drawings seem tame, missing the intense drama of the unfolding events. The moment when the wicked stepmother, who has discovered the hidden castle, turns the boys into swans should teem with a sense of disaster. Instead, we see an image of the sister, the lone child indoors on that unfortunate day, looking merely surprised as her brothers sprout feathers and rise in the sky.

Despite these incongruities, the illustrator offers a rich, symbolic rendering of the daughter’s heroic decision to reject her father’s decision to take her to his home in favor of setting out alone to search for her brothers. Here, we see the girl boldly abandoning the idyllic estate and entering a foreboding forest, drawn with gloomy gray strokes and dark shadows.

When at last the sister finds her siblings in a robbers’ den, they tell her they may shed their feathers for only a quarter of an hour every night, and then they become swans again. The curse can only be broken if she agrees to speak not a word for six years and to sew them six shirts made of starflowers.

Some might wonder what starflowers are (in his famous folktale anthology, Jack Zipes chose the word asters), but the translator has offered a pleasingly literal translation of the German word Sternenblumen, which the Brothers Grimm used, and so feels authentic. One of only a relatively few picture-book versions of  “The Six Swans” published, this edition is smoothly translated by Anthea Bell, whose acclaimed work includes the French comic-book series Asterix, as well as the middle-school fantasies of Cornelia Funke (Inkworld trilogy).

Although she faithfully follows the fairy tale’s spirit and pacing, Bell has lightened up the story by omitting some of the gory details that unfurl. A handsome young king happens upon the girl in the forest, falls in love, and the two marry, even though she never speaks to him. This so displeases his mother that she steals the baby the queen bears—and the next two—until finally, the king agrees to let his wife be tried for murdering the children. She refuses to defend herself and is condemned to be burned at the stake.

While the Grimms’ version offers stark poetic justice for the wicked mother-in-law when the brothers’ spell is broken and the sister finally tells her husband she has been wrongly accused by the woman, this version relates that the wicked one is “taken away and locked up forever.”

The Six Swans will inspire many young readers and caring adults who crave tales highlighting heroic females who do not resort to violence to save the day.