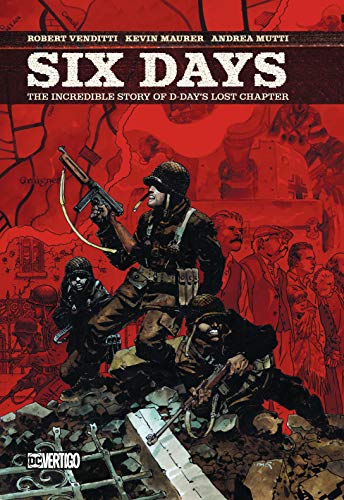 “a first-rate effort with enough detail to capture the history combined with a sharp pace and magnificent artwork. It is an excellent use of this medium to convey a story of D-day that has indeed been lost to history before now.”

The illustrated story of the Battle of Graignes definitely lives up to its title of telling D-Day’s incredible lost chapter. In the early morning hours of June 6, 1944, nearly a dozen planeloads of paratroopers belonging to the 3rd Battalion, 507th Parachute Infantry Regiment were dropped nearly 20 miles off course from their intended drop zones. These paratroopers were dropped in a wide field of marshes south of the town of Carentan, near the village of Graignes. As the paratroopers struggled to escape their parachutes and heavy loads of gear, they quickly determined they were extremely far from their intended drop zones and had to quickly decide to either march north and attempt to find other American paratroopers or dig in at the village and wait for the Allied invasion to link up with them.

The paratroopers decided to dig in and with the help of the brave townspeople almost 150 American soldiers worked to recover as much equipment and ammunition as they could from the marshes and prepare defensive positions to await the inevitable attack by German forces seeking to reach the beachheads.

This story is developed extremely well by the authors, who create growing tension as the paratroopers and townspeople understand they are along a major march route for German forces who are likely to outnumber and outgun the lightly armed paratroopers.

The interaction of the American soldiers and French civilians is poignantly portrayed, particularly as the French understand that if the Germans retake the town they are likely to face harsh reprisals.

The tension reaches a climax as the Americans encounter the first patrol of German troops belonging to the 17th SS Panzer Grenadier Division on June 10 heading toward Carentan. The Americans ambush this patrol and quickly identify the troops as the vanguard of a heavy mechanized division. Prepared for the anticipated assault, the Americans manage to repulse the disorganized first German attack with coordinated mortar and machine gun fire.

However, the German weight of men and material makes short work of the paratrooper’s defense the next day and the Americans are quickly overrun, the survivors attempting to evade toward American positions around Carentan. But the suffering in Graignes does not end with the battle. The German troops then commit war crimes against both American prisoners and French civilians before setting fire to the village, all of which is deftly handled by the authors, conveying the barbarisms honestly but not gratuitously.

The volume’s bold art excellently compliments the narrative story, which captures the tactical action remarkably well. The collaboration between the writers and illustrator uses bold colors to artistically represent the scenario as it unfolds, particularly the battle scenes and the German atrocities after the village was captured.

As an illustrated history, this is a first-rate effort with enough detail to capture the history combined with a sharp pace and magnificent artwork. It is an excellent use of this medium to convey a story of D-day that has indeed been lost to history before now.