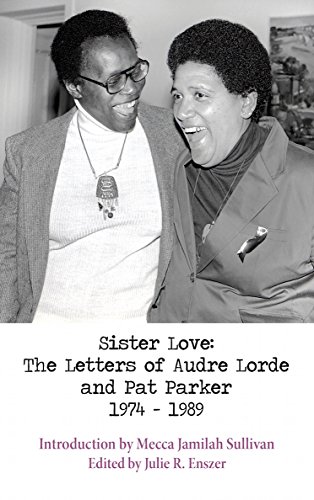 “a book that speaks loudly to black lesbians and to anyone who dares to love fiercely.”

There was a time when people didn’t read a person’s mail or diary. One respected private matters and window shades. People made love in the dark. We are therefore fortunate to have the published correspondence between two important black lesbian writers, especially during these times of a new women’s movement and the daily presence of email, Facebook and Twitter.

So what are we to make of snail mail once called letters? The letters exchanged between Pat Parker (1944–1989) and Audre Lorde (1934–1992) should be viewed as a roadmap and guide into their consciousness and friendship. Their letters are cups of tea and lemon ready for their admirers and scholars who wish to know more about their lives.

For 15 years the two women who made a significant contribution to feminist, black lesbian and queer culture exchanged letters and postcards. Editor Julie R. Enszer presents the correspondence in chronological order and includes an August 20, 1979, letter from Laura Brown (Parker’s partner in the 1970s) who wrote to Audre Lorde thanking her for composing a letter of support on behalf of Brown and Parker who were attempting to adopt a child. Near the end of Sister Love there is a letter Lorde sent to Martha “Marty” Durham following Parker’s death on June 17, 1989.

It is Durham, Parker’s lover who is responsible for placing Pat Parker’s letters in order and giving them to the Schlesinger Library. Enszer, the editor of Sister Love provides excellent footnotes to the correspondence. The footnotes are similar to a bass player accentuating and underscoring a musical composition, often adding clarity and important historical and personal context.

When Pat Parker is diagnosed with breast cancer the book reads almost like a companion text to The Cancer Journals written by Audre Lorde in 1980, eight years before Parker’s letter of January 4, 1988. In her letter Parker opens by using the greeting “Sister Love” and then she begins her first sentence:

“I have no idea where to begin this letter.”

What will follow this line is the type of intimacy found in letters that surpasses the “reconstructed voice” presented in memoirs. Parker writes about the physical pain which came after her mastectomy. We feel her reaching out to Lorde in order not to be alone. Lorde responds on February 6, 1988, with words that will resonate with anyone battling cancer:

“You are a survivor, Pat, and that battle on a physical level is now braided into our lives, but the war is not alien, now is it? You and me we’ve been fighting all our lives.”

Sister Love is a book of solidarity and friendship. It is a book about two women sharing tips about the writing life and their love for teaching. It is a book in which women talk about their children as well as their lovers. It’s a book that speaks loudly to black lesbians and to anyone who dares to love fiercely.