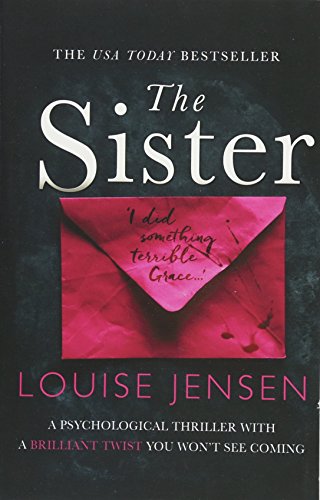 Grief, heartfelt guilt that may or may not be deserved, and a trusting nature that leaves no room for emotional self-defense provide the perfect storm of psychological stressors for a character unaware of her complicity in a series of unwise choices that will inevitably lead to her own death. The Sister by Louise Jensen leaves one screaming “Don’t be so trusting! Don’t you see the predators coming?”

Grace Matthews’s emotional dependency on her childhood friend, Charlotte Fisher, better known as Charlie, whose sudden death leaves her adrift without a psychological anchor, is vulnerable to increasing paranoia as she senses that not only is she being stalked, but that recent odd, even dangerous, occurrences are not random accidents.

Nine-year-old Grace comes to live with her grandparents in a small Oxfordshire village after the death of her father. Despite her grandparents’ assurances that she will make friends to replace her old ones, Grace is unconvinced. “I won’t if they find out what I’ve done.”

Intermittent flashbacks reveal Grace’s growing friendship with Charlie, as well as provide the contrasting backgrounds of the two girls. Grace, guilt-ridden though she is, lives in a stable environment, while Charlie is the daughter of an alcoholic single mother with an affinity for taverns and short term relationships with unsuitable men.

Grace knew and loved her father, and shared a happy life with her parents until the accident which killed her father, an accident for which Grace knew was her fault. “I hated the weekly therapy sessions, talking about my feelings—as if that ever change things.”

Charlie, on the other hand, does not know her father, has never met him, does not even know his name. Her life, even as a nine-year-old, is nightmare of caring for a mother too often passed out drunk, hoping for enough money to buy food, and pay the landlord.

Despite a secure home Grace is fearful and insecure, a good girl who doesn’t want to get into trouble. Charlie, with all her negative social assets, is self-confident, willing to try almost anything, and provides a balance to Grace’s shy, uncertain personality.

Grace and Charlie become almost inseparable friends. Along with Siobhan, Esmee, and Dan, the four form a bond, at least they do until their teenage years, when Siobhan wants Dan, who seems too interested in Grace. The eternal teenaged triangle breaks up the group, with Siobhan making derogatory comments to Grace.

After graduation, Charlie disappears, and Grace and Dan become a couple, buying a house together and talking of getting married. Then, after six years, Charlie returns, appearing during a marathon Grace has organized. Charlie insists on participating, but suddenly dies during the race.

Grace is devastated, totally unable to function, even emotionally shutting out Dan. For six months she barely leaves the cottage, hardly able to work, dependent on pills to sleep. It is during this period that she senses a stalker, receives anonymous phone calls, and sees a mysterious red car following her. She assumes that it is her paranoia.

“There’s a shuffling on the porch. Footsteps. I press my ear to the door and think I hear breathing, but I know that’s impossible over the sound of my heart.”

Then there are the notes, ugly threats printed in letters cut from newspapers and magazines, but she started receiving those in high school. They could have nothing to do with today.

Then she meets Anna, who claims to be Charlie’s twin sister—and she does look like Charlie. Unable to cope with twin infants, Charlie’s mother had given Anna up for adoption, but kept Charlie.

Grace is thrilled and offers Anna the spare bedroom until she can find another job and a flat of her own. She shows Anna all the photographs she has of Charlie and tells endless stories of her best friend. Anna has become her new best friend.

Dan is unhappy with Anna’s presence in the cottage, and pressures Grace to tell the other woman to leave. But Grace can’t bring herself to do it, even given the number of derogatory remarks that Anna makes to Grace. Until other things begin to happen: things began to go missing; Anna and Dan argue bitterly; and Grace’s cat, whom she loves dearly goes missing.

In a bizarre climax reminiscent of Stephan King, Grace and Charlie’s mother, Lexie, are prisoners of a deranged woman determined to violently remake the past.

The Sister is one of those stories in which the reader wishes to intervene. If only Grace were stronger, less trusting, if only she would use better judgement. The suspense tightens nerves and roils one stomach. The phrase If only becomes a mantra.

The characters of Grace, Charlie, and Anna are well-drawn, but one wishes Grace were not so spineless on occasion. Nonetheless, author Jensen can definitely weave together plot, setting, and character to create suspenseful tale.