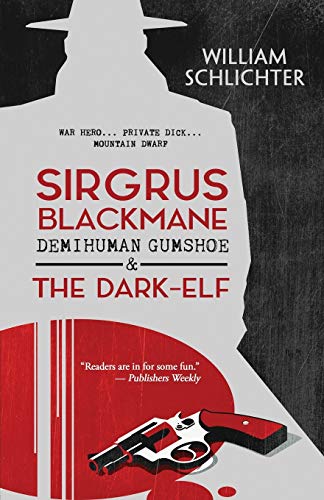 “A skillful blending of magic and mayhem, the supernatural with the mundane. Think paranormal crime noir, with an opening akin to The Maltese Falcon and characters who could, albeit with an alchemical blend, be from any Chandler, Hammett, or Spillane novel.”

After the Great War when humans bested the Orc with the help of the mountain dwarves, Sirgrus Blackmane and one of the human members of his troop decided to go into business together; thus Mason and Blackmane Detective Agency was born.

Now it’s Prohibition, and Sirgrus is being escorted by two uniformed officers to the site of a rumrunner bust headed by Agent Edgeangel of the Justice Bureau’s Mage Division.

“His suit gives away that he is no patrolman. His tie reveals his talents if a person knows what the symbols mean. He’s human, and human mages are a dying breed. Mages have always been feared.”

“Rum-running busting is a job for the common officer, not a Master of the Dark Arts. If he locks in a raid with enough barrels of rum, he gets to go back to Magical Misconducts.”

At present, Sirgrus isn’t concerned with the agent’s ambition. He’s been called in to identify a body. That of his partner, whose body was found during the raid.

“Mason was my partner. Our names are painted together on the door of our office. My partner’s dead. I plan to find out why.”

First, however, he has a prospective client waiting in his office, a human showgirl named Mildred.

Sirgrus soon learns Mason had dealings with the two major crime bosses of the Open Quarter of the city, where demihumans and those of a more magical persuasion live: Medrash the Dragonborn, who owns the Dark-Elf night club, and Arminio Cavalieri, his rival.

Neither will tell Sirgrus what his former partner had agreed to do for them. They expect him to deliver on Mason’s promises, however.

“What in the name of Thorin’s beard, did Medrash hire Mason to do?”

FACT: Mason was working a double-cross, playing the two bosses against each other. Mildred’s sister worked at the Dark-Elf. She was also Mason’s girlfriend. She and Mason are now both dead. Sirgrush will also be if he doesn’t keep up Mason’s end of the bargain.

Soon, there’s another death, non-related, Sirgrus hopes: his lieutenant from the war.

There’ll be a war hero’s funeral for this one. Probably the survivors will attend, to remember one specific night in the war none of them can forget.

Shortly afterward, Sirgrus receives two packages from the lieutenant, one for him and one for Mason: Rings of Protection, given to each man in the hopes the spell cast on it will keep him safe in battle. The lieutenant collected all their rings after the war and kept them, but now, they’re being returned.

“Constant reminders of the Great War. No amount of  liquor can wash away those memories. We did our duty. We came home. Why can’t we forget?”

Others have received back their rings, also, and someone named Srobat Quill, a human who doesn’t smell human but doesn’t have the scent of magic either, wants them.

Sirgrus has too much on his plate, and too little time to clear it.

This novel is a skillful blending of magic and mayhem, the supernatural with the mundane. Think paranormal crime noir, with an opening akin to The Maltese Falcon, and characters who could, albeit with an alchemical blend, be from any Chandler, Hammett, or Spillane novel.

Sirgrus may be a demihuman, but in this alternate universe, his reactions to the war and the events going on around him are all too human, other than the fact that he continually wishes for his trusty axe to protect him instead of a revolver.

In Sirgrus’ quest to find his partner’s killer, as well as free himself from the threats the crime bosses pose, he exposes the angst and post-trauma of a nation recovering from what an event considered the Greatest War of All, only to be thrust into the shock of Prohibition where criminals manufactured the one thing they all needed to dull their memories.

The case may be solved, but one loose end is left untied: Srobat Quill. Who or what is he? Sirgrus may say “Quill is at the bottom of my list of priorities. He isn’t my worry anymore,” but is that true? Will a sequel bring that particular entity into focus?

Only time and the author can tell.