The Sins of Viscount Sutherland 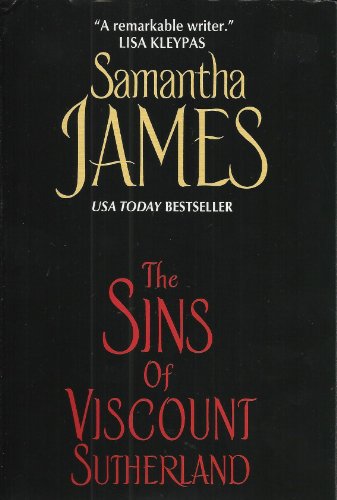 First in the series The Lords of Sheffield Square, The Sins of Viscount Sutherland is a very “event-full” novel. Opening with a lethal duel, the book includes a deadly carriage accident, a shotgun wedding, two births, and a succession of other dramatic incidents and revelations. Interwoven with these is the push and pull of the relationship between Claire Ashcroft and Viscount Grayson Sutherland. It is an ambitious endeavor for author Samantha James.

The duel of the prologue portrays “Gray” Sutherland as a man so tortured that he wishes to die. Unfortunately, instead of dying himself, he inadvertently kills Claire’s brother Oliver. Seeking revenge, Claire sets herself up as a young widow in search of sexual entertainment, her intention being to make Viscount Sutherland grovel at her feet while she spurns him. Instead he successfully seduces her and, unbeknownst to him, leaves her pregnant.

The drama cascades from there as the two dance their minuet of passion, coming together and moving apart throughout the book. The love scenes between Claire and Gray are convincingly hot and sensual; there is never a question of the physical chemistry between the two main characters. The emotional chemistry is more elusive, as the attraction seems more about the body than the heart.

The problem may lie in Claire, who is somewhat difficult to sympathize with. She clings to her scheme of vengeance despite dissuasion from her closest friend and her own admission that it will ruin her life. Yet we have no sense of why her brother would evoke such obsessive devotion since the prologue portrays him as a rather contemptible young man. In addition, her plan assumes that she can attract a titled, notorious ladies’ man and then break his heart, which seems both immodest and farfetched. At times, she even appears slightly unbalanced emotionally.

Gray Sutherland offers more to engage the reader. Yes, he is a seducer of women, but only those whom he believes are experienced and understand the rules of the game. Claire deceives him into thinking she is such a woman; otherwise, he never would have been tempted by her lures.

We know from the start that he did not intend to kill her brother, firing only to salvage the younger man’s honor. It is also clear that Gray suffered a terrible tragedy involving his wife and infant son, a story to which Ms. James gives a surprising twist when it is revealed. In fact, Gray is an honorable man who is driven to self-destructive behavior by a guilt he can hardly bear.

The supporting characters often seem more plot devices than fully realized human beings. Gray’s mother, Claire’s best friend, and the man who courts Claire after Gray ruins her never quite come to life. Perhaps the most intriguing secondary player is Gray’s friend the Duke of Braddock, who stands as the Viscount’s second at the fateful duel and is a famous womanizer in his own right. The Duke almost certainly will have his own book in the future, since he is one of the lords in residence on Sheffield Square.

The strengths of this book lie in swift pacing and dramatic incident, rather than profound character development or clever dialogue. For the reader who seeks a rollercoaster of high emotion and passionate sex, The Sins of Viscount Sutherland offers much to enjoy.