Singing Like Germans: Black Musicians in the Land of Bach, Beethoven, and Brahms 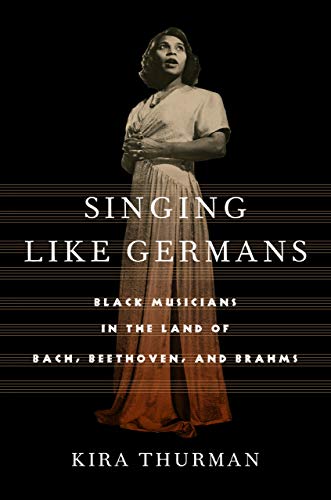 “Singing Like Germans is a superb piece of historical research enlivened by its author’s deep fascination with her subject matter.”

Kira Thurman is uniquely qualified to write this fascinating study of Black classical musicians in Germany during the last century. She was raised in Vienna where she trained as a classical pianist before deciding to come to the United States to study both German history and musicology. Singing Like Germans chronicles the experience her fellow African Americans had in establishing their careers as classical artists in Germany and Austria. Her story begins in the 1870s and continues until Grace Bumbry’s 1961 Bayreuth debut as the “Black Venus” in Wieland Wagner’s production of his grandfather’s Tannhauser.

Bumbry’s Venus encapsulates the experience of Black artists in Germany. Like many before her, she was trained by a German (the great soprano Lotte Lehmann), and experienced the typical mixed message sent by German audiences and critics. She received a prolonged ovation at her debut, but also complaints that she was taking a job away from German artists. Wieland Wagner’s interpretation underscored stereotypes of exoticism and hypersexuality often attached to Black women.

Thurman focuses on Black lieder singers during the first half of the 20th century when Black singers found it difficult to be cast in opera. More important, lieder was considered to be the ultimate German musical form, the sole province of German artists. Thurman chronicles how two singers in particular, tenor Roland Hayes and contralto Marian Anderson, represent the problems such Black artists had to face. Both were trained by German teachers, and both set out to master the German song repertoire. However fine their interpretations were, the artists’ race could never be forgotten. Some positive reviews would use phrases like the singer’s “white soul” to praise how their artistry erased their Blackness. Less positive listeners would note that however technically proficient the singers were, their sound was “too Black” to be appropriate for lieder. Still, some Black singers and musicians found Germany less hostile than Jim Crow America.

When the Nazis brought notions of racial purity to the fore, Black artists faced greater danger. Having a Black singer perform the works of great German composers became a violation of the racial purity of German culture. Black musicians had to try to establish careers in the United States. Marian Anderson outfaced racism when she moved her recital to the Lincoln Memorial after the Daughters of the American Revolution refused to allow her to sing at Constitution Hall in 1939.

After World War II, some Black artists were hired in Germany in part to demonstrate that Germany had been miraculously cured of its racism. Unfortunately, many Germans still resented non-Aryans on their concert stages. Communist East Germany, in particular, tried to present itself as a bastion of tolerance in contrast to racist America. Paul Robeson was celebrated as a national hero. Despite the government’s official position, there were protests when Black artists performed.

Thurman has pored through reviews, newspaper articles, correspondence, and memoirs to present this fascinating picture of the double bind Black artists faced. Dressed onstage in elegant formal wear, they were considered superior to Black popular and jazz artists, but still primitive, inferior to white Germans. However masterful they were technically, however authentic their interpretations, they could never escape the stigma of being Black. They were, for some detractors, encroaching on sacred soil.

Singing Like Germans is a superb piece of historical research enlivened by its author’s deep fascination with her subject matter. Although the book has been published by a major academic press, it will be fascinating to a wide body of readers who are interested in classical music, German history and African American history.