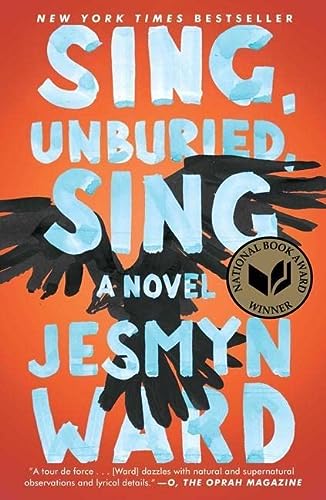 Jesmyn Ward’s strength comes from how unflinching she can be when looking at the raw Mamterials she works with her novels. This was true for her debut novel Salvage the Bones and it’s equally true for her latest novel Sing, Unburied, Sing.

The easiest way to describe this book would be to liken it to a wound with a thin layer of scabbing over it. You think it’s healed, and yet if you scratch the surface a little, you’ll find that it begins bleeding once more. This is not only because of the race related, post-slavers era issues such as interracial relationships and the incarceration of blacks for flimsy offenses, at best in order to prolong the institution of slavery. It is also because each character in the novel is in himself a thinly scabbed over wound, both because of the history that’s been made part of their past and because of the past they’ve inflicted on one another.

Sing, Unburied, Sing is a complicated novel with multiple stories working through it simultaneously. The story begins with Jojo, a young man who lives with his grandparents, his baby sister Kayla and his mother Leone. Jojo refers to his grandparents as Mam and Pop, as it is they, not Leone who have become caring parent figures for him. He, in turn, has become Kayla’s parent, taking care of her at all times.

Leone, for her part, is mostly absent from her children’s lives. Though there is a part of her that does yearn to be a good mother, if not for Jojo then for Kayla, she simply is unable to do so. This is partly because the Man she loves, Michael, is in prison, partly because she’s a drug addict, and partly because she keeps seeing the ghost of his long dead brother, Given.

It’s at first debatable whether or not the reason Leone is prone to these visions is because of her drug habits. But as the story progresses, it is revealed that Leone’s mother’s side of the family has always been prone to seeing ghosts and communicating with them. Given, therefore, is not the only ghost that haunts this household. In fact, Jojo and his grandfather deal with their own ghosts though the forms that these ghosts take are very different from one another.

Jojo grows up with Pop telling him stories. These are generally stories of his time in prison where he was made to serve time for paltry reasons. Pop frequently talks about one young inmate that he met during his time at the penitentiary. However, despite his insistence, Jojo is never able to get his grandfather to reveal what become of him, almost as though it’s too painful to remember.

Things finally come to a head, however, when Jojo, Kayla, and Leone set off to the penitentiary where Michael is imprisoned, the very penitentiary where Pop had served time. Along this long journey, the characters are forced to spend more time together in close proximity than they ever have. Thus they are made to confront the uncomfortable realities of where they stand in relation to each other, their dead and the hostile, external world.

Sing, Unburied, Sing doesn’t shy away from the uncomfortable moments. In fact, the novel fully embraces them. Whether talking about the relationship between Michael and Leone which has caused Michael to be ostracized by his own family, Given’s bloody and covered up death, the unlawful incarceration of Pop, or even scenes as seemingly simple as Kayla getting car sick and continuously throwing up, the novel never once allows the reader to avert her gaze.

Thus Sing, Unburied, Sing confronts issues of a time period that seems oddly absent from the minds of some. By drawing on the details of lived moments and switching perspectives between characters such as Jojo and Leone, the novel immerses readers in them.

The unflinching gaze of the storyteller is only part of the reason why history is so skillfully woven into the lives of these characters. Another, of course, is the existence of ghosts that literally and figuratively haunt some of them. Had these ghosts been allowed to have full reign over the story, they would have appeared as out of place and unnecessary. However, because their existence isn’t tackled in full force until the final, climactic scenes of the book—which prove to be a good counterbalance to the generally slow-paced plot itself—it is easy to believe in their existence. The fact that these ghosts take back seats in the backstories of main characters, thus becoming part of their personal histories, make them more tangible and believable than had they been recounting their stories themselves.

This interplay between the dead and the living gives a haunting quality to the novel. It allows the reader to fully explore the significance of these ghosts to the story, characters, and even the history of Mississippi as a whole. The characters’ pasts are thus made an inextricable part of a more general yet nonetheless painful history.

Two kinds of pain, two kinds of history feed into each other throughout the novel, and when things finally come to a head there are only two ways left to our characters: confront the past and try to find a way through by reconciling it with the present or escape and pretend that the wound has scabbed over once more.