Sinemania!: A Satirical Expose of the Most Outlandish Movie Directors: Welles, Hitchcock, Tarantino, and More 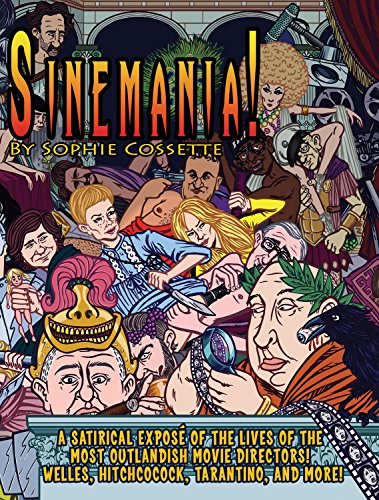 “The details of debauchery and depravation told within these pages would make a casual sinner blush . . .”

In Sinemania! Artist and writer Sophie Cossette brings the sordid tales of Hollywood’s dark secrets and explodes them into a parade of narcissists, idiots, cruel bastards, and deliciously evil women.

With no pretense of criticism and an occasional artistic deconstruction of the films they helped create, Ms. Cossette lays bare the faults, failures, successes, peccadilloes, and perversions of some of Hollywood’s most famous and successful directors.

As she does, Ms. Cossette reminds us that while movie stars and actors may capture the majority of the attention from media and fans, there are an equally crazy and irresponsible number of people behind the camera as well. She expertly details the eccentricities and insanity of those who are often responsible for the look, narrative, and style of a film.

The characters come from across the globe. Short biographies of Americans such as Orson Welles, Woody Allen, Spike Lee, Sam Peckinpah, Kenneth Anger, and Russ Meyer meet their match in excess when put up against Europeans such as Roman Polanski, Werner Herzog, Pier Paolo Pasolini, Fritz Lang, Ken Russell, or Guy Ritchie.

The list of sins she writes of would delight the devil himself. The details of debauchery and depravation told within these pages would make a casual sinner blush and a career criminal jealous. The amount of ego found in these tales is immeasurable according to the tools of modern psychiatric science.

All of which makes her work fascinating to read and see. Among the stories there is a mixture of the known and the obscure. But seldom have they been told in such a wild and often graphically illustrated manner.

As unreal as the behavior of some of the directors may be, the exaggerated nature of what Ms. Cossette illustrates reminds us that these actions were very real and often deeply affected the lives of those around them. We stand back in disbelief at what some of these people did and what they got away with or went to jail for.

While the stories she tells are filled with the obscene and unusual behavior of those she writes of, Ms. Cossette writes of much more than the sexual, vicious, and often drunken or drug-addled behavior of hedonists using art as an excuse to go crazy. There is a film historian who knows exactly what she writes of at work here.

In the story of Alfred Hitchcock she reminds us that Hitch used to sleep through scenes and somehow wake up in time to describe exactly what was wrong with the scene. His voyeuristic mind seemingly awake while his conscious mind is asleep.

With over 20 stories told, Ms. Cossette jumps across many different narrative techniques as she writes. The story of Eric von Stroheim uses panels that appear to be still frames form a silent move. Each one frames a statement made by Mr. von Stroheim as he describes his privileged background.

Countering each one of those panels Ms. Cossette showcases the documented reality of his life as it actually was. His claim of having been an officer in the army for seven years stands in stark contrast to the accepted reality that he was kicked out of the army within five months of enlistment. A reinvention can be excused but as the tale progresses, the hypocrisy, deceit, and delusion grows to Olympian proportions.

A skilled artist with an individualistic style, Ms. Cossette can subtly apply a different technique that is more than applicable to the biographical subject at hand.

When writing of Dennis Hopper she opens his life with a full page that knocks at the door of the way Ralph Steadman used to bring life to Hunter S. Thompson’s own drug-crazed escapades. It is a perfect nod to the times and the director’s well-documented excess.

In “Duel of the Hellraisers!” she stages a debate between Sam Peckinpah and Rainer Werner Fassbinder as to who caused the most damage. The style she chooses seems to come close to work that MAD artist Mort Drucker (who was also known for his many movie posters of the time) used.

Despite the rolling emphasis on the oddities and the arrogant, moments of tenderness slip through her portrayals. Ms. Cossette’s rendering of actress Giulietta Masina as she appeared in Frederico Fellini’s 1956 Academy Award winning film La Strada captures the actress at her most heartbreaking. She is seen standing behind the sight of a bare-chested Anthony Quinn mightily bursting free of chains as a small crowd of children looks on.

Despite her diminished presence in the drawing, Ms. Masina steals the page with her simple folded hands, her large expressive eyes and the darkness of her attire. In a single drawing the artist captures not only the film, but the idea that freedom can be many, many different things to each of us. The page may look like simple cartooning, but it takes great skill to convey so much heart with so few lines and so little ink.

In some ways the most fascinating thing about the book is the way that we can almost stand detached from what we see. You can’t help but almost laugh at how much nerve some of these people had. A position that Ms. Cossette seems to share.

A tremendous book for anyone who loves film, remembers National Lampoon at it’s heyday in the early to mid-seventies, or worships at the feet of the celebrated and somewhat creative.