Sin with a Scoundrel: The Husband Hunters Club 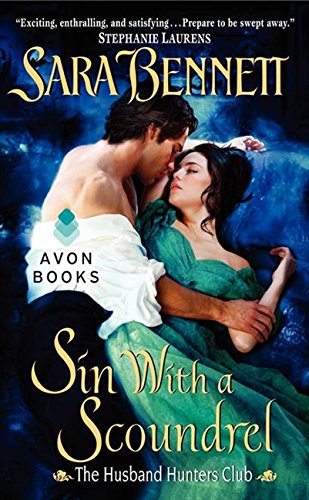 “The characters are sharply defined, the dialogue bright, and the narrative funny and interesting.”

Miss Clementina Smythe is a young woman with a weighty problem. Her mother, Lady Carol Smythe, has told her in confidence that the family fortunes are a loss, their finances a shambles. In a very short time, without the immediate injection of cash, they will be turned out of their ancestral manor, bag, baggage, and all.

Tina, as her friends call her, is determined that not happen. She decides it is her place to save her family’s good name by engineering a marriage to her brother’s best friend, Horace Gilfoyle. Unfortunately, Horace thinks of her as an innocent little girl.

What’s a grown woman to do?

Enter Sir Richard Eversham: well-known rake, fallen nobleman, and scoundrel. He has a reputation for helping well-bred gentlemen of small fortune find rich wives; why, thinks Tina, shouldn’t he do the same for her? In her desperation, she enters into an arrangement for lessons in seduction.

So begins this spirited book by Sara Bennett, the fourth and final in her Husband Hunter’s Club series. Ms. Bennett immediately sets the scene of Regency Britain, pleasingly invoking social mores and modes of dress that recall Jane Austen.

Reminiscent of Austen, too, is Ms. Bennett’s sprightly heroine, Tina. Prim and proper by upbringing and education, Tina nonetheless girds her loins to meet the seductive lion in his den. Her practicality is both refreshing and amusing in a romance heroine, an attribute that carries throughout this book. Her physical beauty is a given, but is not referenced to a nauseating extent; nor is the expected attractiveness of her tutor. This is also a breath of fresh air.

We have the expected scenes of seduction lessons, including one of a first kiss that is quite funny. Two sub-stories are also quite well done. One involves Richard’s determination to solve the murder of his brother (and reveals his character to be not quite what Tina expects).

The second story, involving a romance between servants, isn’t really necessary, but the characters themselves are so well drawn and endearing that it goes down easy.

Explicit sex scenes in modern romance novels are de rigueur, and Sin with a Scoundrel is no exception. They are few, however, and well written. In fact, aside from these three scenes, this book could be a modern version of an Austen novel. The characters are sharply defined, the dialogue bright, and the narrative funny and interesting. Only the awkward prologue and introductory information, tying this story to the previous stories in the series, are at all off-putting.

In Sin With a Scoundrel, Ms. Bennett has created a lovely, modern-day evocation of the Regency novel. Highly enjoyable!