A Simple Favor: A Novel 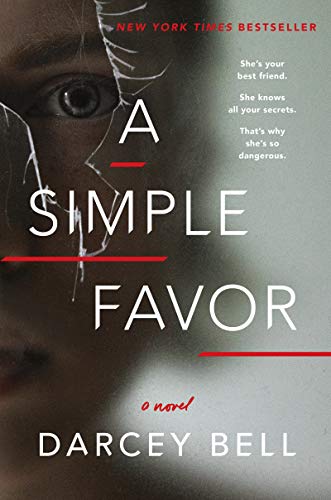 Stephanie, the author of a Mommy blog, writes to connect with other women to help her overcome her loneliness and recover from the death of her husband Davis, and half brother, Chris from a car wreck three years ago. Fortunately, her five-year-old son Miles is a distraction for her grief and the center of her existence.

Emily, a chic and sophisticated woman with a high-powered job at a design firm in Manhattan, befriends Stephanie. Emily's son Nicky is Miles' best friend, and Stephanie is thrilled to finally be part of a tight female relationship.

Though the two women are as close as sisters, they do not disclose everything about their pasts or their current lives. Stephanie often takes Nicky home from school with Miles, or he stays at Stephanie's if Emily needs to work late. Stephanie adores Nicky as if he was her own child and is happy the boys get along so well together.

One day Emily asks Stephanie to do her a small favor by taking Nicky home with her and Miles until she can fetch him later that night. Of course, Stephanie complies, expecting Emily to phone when she is due to be there. Always in constant touch with each other, when Emily doesn't show up or respond to any texts or calls, Stephanie begins to panic. Emily always contacts her and not just when it's about Nicky. Could she have been in an accident? Abducted? Where is she?

Stephanie doesn't want to worry Emily's husband Sean who is in London for business, but when another day passes with no word from Emily, her concerns escalate. Sean believes Emily is away for work, but Stephanie envisions all kinds of devious scenarios.

It is here where Stephanie uses her blog to seek advice. Though she never divulges personal information, she feels compelled to do so now.

"This is going to be different from any post so far. Not more important, since all the things that happen with our kids, their frowns and smiles, their first steps and first words, are the most important things in the world.

"My best friend has disappeared. She's been gone for two days. Her name is Emily Nelson. As you know, I don't ever name friends on my blog. But now, for reasons you'll soon understand, I'm (temporarily) suspending my strict anonymity policy."

Through her correspondence, Stephanie unburdens her uncertainties hoping for solace or answers. Then when Sean returns, Stephanie convinces him she is not just another hysterical mom. An investigation commences with the police notified, but they put Emily took off. Stephanie knows better. Emily loves her son and would never leave him. Something is terribly wrong.

The days pass, and Stephanie's blogs grow more passionate from her fright about Emily and her paranoia about foul play. United in their loss, she works hard to comfort Nicky and Sean. She and Sean become close, though Stephanie senses he is withholding things from her.

Stephanie becomes more concerned and does some investigating of her own. What she finds out about her friend is upsetting, leaving her to distrust the woman she thought she knew so well.

Penned in the first person voices of both Stephanie, Emily, with input from Sean, as well as the blog posts establishes Darcy Bell's debut novel of psychological suspense as an intense, captivating, and astonishing thriller ending in an unforeseen and surprise ending; the premise: Be careful who you trust.