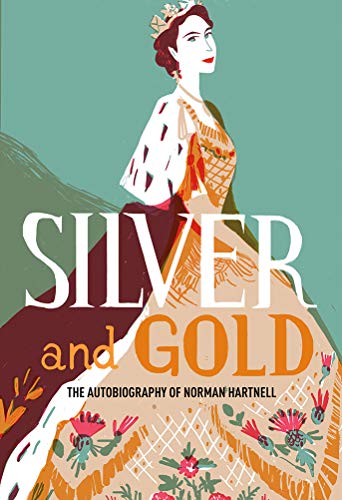 Almost any fashionphile or Anglophile will recognize the name Norman Hartnell, the designer who wardrobed the princesses and queens of the British Royal monarchy for almost one half century.

What is fascinating about this concise autobiography is that it is hardly self-congratulatory and yet extremely engaging as this man’s life story is told in his own words and in a rather non-British tone. Hartnell speaks of his life in a very relaxed and often casual manner and almost conversationally.

The book is overflowing with names that span 50 or more years and boasts notables from the stage, high society, and royalty as well as from the fashion elite of the era. Consequently, some readers might find many names unknown to them, but those of of a certain age will certainly recognize most of the luminaries he mentions and if not, then that’s what Google is for and worth the time to investigate.

Hartnell states in words to the effect that this is not a book or manual about how to start a fashion business, but is a book that speaks to what one ought not to do when opening a fashion business. Unquestionably most of the knowledge and information he imparts is as timeless today as it was then.

Another truly alluring and somewhat charming aspect of this petite volume is that this is not a rags to riches story and nor a Cinderella type recounting; the book is filled with the ups and downs that faced this man. In simpler terms, “we make plans and God laughs!” Hartnell did not start out wanting to be a designer and yet after many false starts and several changes in his goals and mindset, the man became an icon of 20th century fashion.

The prospective reader needs to keep in mind that firstly the book is without any images so yes, you must read it, and secondly that Hartnell was a Brit and so reflective of his designs. He was neither a St. Laurent nor a Balenciaga, but he filled a niche that many other designers would have given anything to have achieved the stature that came with his good fortune.