The Silent Treatment: A Novel 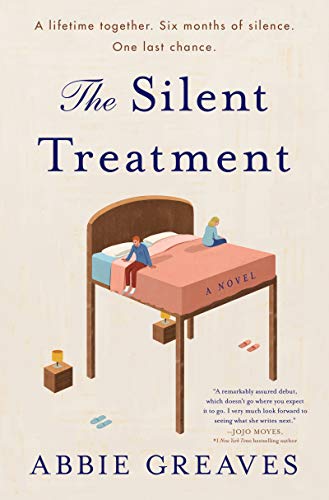 Professor Frank Hobbs never thought he'd find love, that is until he met Maggie. Working on his Ph.D. at Oxford, he takes a break and spots the vivacious young woman at the Rose & Crown, knowing from the beginning she is the one for him. At age 26, Frank is somewhat socially inept, yet Maggie fascinates him. While at the pub, he remembers:

As shy as he is, Frank watches her leave without getting her phone number or asking her out. She consumes his every waking thought, and he fears he'll never see her again, but when his obsession with her causes him to become ill and in need of a doctor, he is surprised to find Maggie works as a nurse in the physician's office. Finally, mustering up the courage to ask her out, he is overjoyed. No two could be more in love than Frank and Maggie, and when she reports she is pregnant, Frank's heart soars. He pleads with her to marry him, and when she accepts Frank believes there couldn't be a happier man on the planet.

The newlyweds are blissfully happy until Maggie miscarries. Long ago, she had confided in Frank about her unhappy childhood and her mother's disregard for her. She hoped by having a baby she would show it all the love she never got and be a perfect mom to her. Though this loss upsets Frank, he is more than content to have just Maggie while she falls into depression wondering if they'll ever be blessed.

Fifteen years pass and the unexplainable happens. Maggie conceives. She and Frank are ecstatic though they try not to get their hopes up. But when she gives birth to a healthy baby girl, they name Eleanor, both feel their lives are complete. No parents could love a child more than they love Ellie. She is their whole focus, and they are fascinated by her intelligence and precociousness. So involved are they in her that they rarely let her socialize with other children. By the time she is old enough to enter school, they don't want to be apart from her. Would they be considered smothering? Others think so, but they live for their child. And, it seems Ellie believes they were all she needed. as well.

Things go well as Ellie matures; she is smart and with getting exceptional grades, has a bright future ahead of her. But one night when she is 16, she comes home after being out with some friends and her whole demeanor is changed. She suddenly is sullen and locks herself into her room, not wanting to be with her parents. Maggie and Frank are stymied as to what they should do. Is this just a passing phase? Is she showing signs of a normal, somewhat rebellious teenager? Their angst grows as they worry about her but decide to let her work it out on her own when she refuses to confide in them.

The years fly by Ellie remains brooding and distant, and when she is ready to attend university, they believe she'll revert to her happy and outgoing self. But this does not happen, and she becomes even more estranged. Meanwhile, they grieve over the loss they're feeling without her around, and things become tense between husband and wife. For six months, Frank does not speak to Maggie. Is he blaming her for Ellie's downfall? Maggie did everything she could to be a warm and loving mother. Has she lost Frank now, too?

The narrative above turns into the backstory as Frank visits Maggie in the hospital after she tries to take her own life. Married for more than 40 years, Frank, now in his late sixties and retired, spends all his time playing chess on the computer while Maggie tends to household chores. When the smoke alarm rouses him from his computer-induced stupor, he heads downstairs to find Maggie on the kitchen floor, an empty pill case by her side. In a panic, Frank calls for assistance to have her hospitalized, where she is placed in intensive care, barely alive. The doctor informs him of her dire situation, but Frank insists they do everything to save her.

Maggie's nurse, Daisy recommends Frank speak to her, though she is in an induced coma:

"'You can speak to her, you know,' Daisy says. 'It's so quiet in here, often people feel scared to speak aloud. But you have to push through that. Let your wife hear your voice.'"

Shamed and concerned, Frank knows he must confess to Maggie why he hasn't spoken to her in such a long time. But he cannot talk to her if Daisy or other personnel are around. He stays with her around the clock chatting about their earlier years, reminiscing about Ellie's childhood and what a wonderful life they have had together. But he's still too hesitant to confide the real reason why he stopped talking.

Meanwhile, hours pass, and with no change in her condition, it is recommended they take Maggie off life support. This is something Frank refuses to do. He will not let his beloved wife go. So, they focus on stabilizing Maggie and trying to waken her slowly, while monitoring her constantly for the next 24 hours with no visitors allowed. Daisy insists he go home and get some sleep. While there, he has the need to relive Maggie's last moments, and he discovers the planner he bought for her in Paris soon after Ellie was born. Frank never looked through it before thinking she only used it for notes and lists of household matters. Now, his curiosity gets the better of him, and he opens the book seeing his name in her handwriting.

"Those five letters should bring relief, but in reality, all Frank feels is panic. He has spent the best part of half a year dwelling on what he has to say. In the churning cesspit of his mind he had managed to forget that maybe, just maybe, Maggie had something to say too.

"Something every bit as urgent."

Maggie's journaling commences with what she refers to as "Seven Days to Go" as the title of the page. As Frank reads through her script, he is filled with remorse and pain. When he gets to "One Day to Go," Frank is afraid to continue reading. How long has Maggie held these thoughts and feelings inside her? Why couldn't they be open and honest with each other rather than pushing each other away? Will this be the end?

A debut novel, The Silent Treatment is thought-provoking and truly heartbreaking. Though love thrives in this family, it's not enough as the failures, in-depth perspective into the human psyche, and intense sorrow offer much to contemplate.