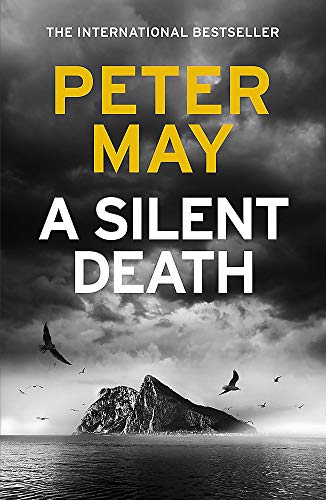 Peter May’s descriptive narrative is the most vivid and lyrical in the mystery genre, but his heroes are knights in rusty armor carrying shields patched with duct tape.

John Mackenzie, a transplanted Scotsman from Glasgow and a superb detective for the Met, sees everything in black and white with not even a razor thin border of gray. In other words, he calls them as he sees them, tact and diplomacy not exactly skills he possesses.

“I think, sir, you’ll find that in most cases I do know better than everyone else, and I am never afraid to say so.”

What John’s new boss at the National Crime Agency sees as an arrogant statement, John considers it an honest remark; he is stating the facts as he sees them.

In addition to being an extraordinary copper, he also holds degrees in mathematics and quantum physics and is working on a degree in astrophysics. He speaks French, Spanish, Arabic, and is now studying Italian. He considers studying for degrees a hobby.

The only subject he seems unable to achieve proficiency is restraint. He simply has no filter between his brain and his mouth. His lack of tact loses him friends, loses him promotions, and lastly loses him his wife Susan.

His new boss, Director Beard, sends John to Spain, the Costa Del Sol, to pick up a fugitive named Jack Cleland, convicted of drug trafficking and murder. It is a simple assignment: land in Malaga, Spain, take charge of Jack Cleland, and return him to England on the next flight.

But events in Spain transform a simple assignment into a major calamity. A man reports a light in his neighbor’s home when the neighbor is gone on holiday. Cristina Sanchez Pradell, and her partner respond to the call. The homeowner, Jack Cleland using a false identity, mistakenly shoots his pregnant wife during the encounter and blames Cristina.

“You made me do it. You killed her. You!

On the way to the airport where John will take charge of him, Cleland escapes from the police van with help of a few allies. He kills all the guards except Cristina’s brother-in-law, Paco. He wounds Paco and gives him a message. “You tell Cristina that I’m coming for her. You understand?”

Cristina tells John how she feels about the threat. “Yes, I am scared. But I also have a husband, a ten-year-old son, a sister with cancer, and aunt who is deaf and blind. And I am scared for them, too. I looked this man in the eye, señor. He is loco. Quite mad.”

Cristina and her family are a contrast to John’s domestic situation. She and her husband, Antonio, and her son, Lucas, are an affectionate family with the only friction resulting from Antonio’s resentment of the danger Cristtina’s job entails.

John senses the tension between Cristina and Antonio, but it is so much less than his own wife’s threat to sue for sole custody of their children. His marriage is fractured probably beyond repair.

John meets Cristina’s aunt, Ana, a remarkable woman who is deaf and blind, a victim of a rare genetic condition called Usher Syndrome. Now in her late forties, and with the electronic devices, including a computer that uses Braille, Ana is happy as her condition will allow her to be. She remembers being able to hear and see once upon a time, so she feels luckier than those born blind or deaf.

Her greatest regret that she and Sergio, a young man she met while attending a school for the deaf were forced apart by both sets of parents. When he contacts her after more than 20 years via the braille-enabled computer, she invites him to come to her home.

Ana cannot see the large SUV with the dark windows parked across the street. Cristina did not know the same SUV had followed Lucas home from school, nor when it tailed her when she picked up sister for her cancer treatment.

None of the women feel the presence of Jack Cleland, and none of them anticipate his plans to avenge himself for the death of his wife he was responsible for killing.

Peter May has a talent for meticulously creating protagonists and antagonists who are so real one can almost see the pores of  their skin, smell the individual scent of each, hear the cadence of their voices, and most of all, appreciate that their actions never contradict their individual characters.

But those characters do evolve as events demand responses. John is determined to be a better father than he had been. Cristina must learn to live with both the sacrifice and the betrayal found in her family.

There is an occasional instance of humor, all caused by John’s hopeless social disconnect, illustrated by his response to the news he is to stay in Spain to help the Spanish police.

The police chief stared at him. “I like you, señor. You have that famous British sense of humor.”

“Mackenzie was not at all sure what was humorous about a dearth of clean underwear.”

Not enough can be said about May’s gift for descriptive narrative. His settings come to life, whether he is describing the sun raising over the coastline of Costa del Sol or the frightening accent of the Gibraltar Skywalk.

A Silent Death is fast-paced action and painful reflection by the characters. It is both a complex crime novel and a dissertation on personal relationships. Highly recommended, but with a warning: Not every book ends in happily ever after.