The Silent Conspiracy: A Novel 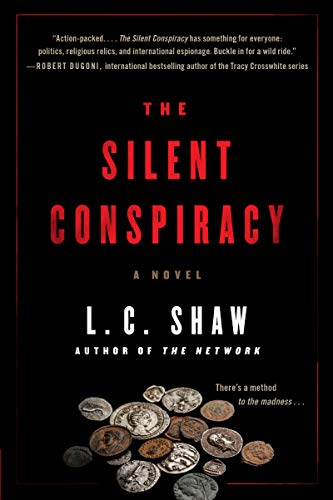 “The premise in The Silent Conspiracy is a good one, the tension is high, and the characters are well developed.”

Maggie Russell is attending her son’s little league game of the season, and watches as her son remains benched, never picked to participate. Anger overcomes her and, in a fit of uncontrolled rage, she murders the coach, and then kills herself.

A woman loved by her family, friends, and acquaintances, no one has an answer to the burning question—why?

And thus begins The Silent Conspiracy by L. C. Shaw.

Enter Jack Logan, investigative reporter, who realizes that Maggie’s actions mirror those of 19 other persons—also well loved, successful, and dead. While Jack begins to investigate and pull the stories together, his wife, Taylor Parks, a freelance television producer, is working on a documentary about an insurance company that is being sued for its underhanded activities in the healthcare arena.

As they continue to work on their individual programs, it becomes apparent that there is a relationship between the stories, and Jack and Taylor’s own personal stories rise to the surface as these investigations grow.

The Silent Conspiracy by L. C. Shaw is a story that bends in the wind. It is two separate stories that are pulled together unexpectedly. In this story, Shaw has created two main characters, two protagonists, each with his and her own failings that are intricately woven into the foundation of the story.

In addition, Shaw has created two antagonists—one for each situation, who are also tied inextricably to each other. But the primary antagonist, Damon Cross, is the puppet master, pulling the strings in pursuit of his own goals—world domination of only wealthy, perfect people whom he can control.

As Jack and Taylor work to determine how these two stories are melding into one, Shaw throws in a zinger when it becomes apparent that Taylor’s 18-month-old son, Evan, is at the heart of the race to find the truth. Jack must continue his search for the facts about the murders and suicides, while Taylor learns that her documentary is being manipulated by forces beyond her control.

When Evan is kidnapped, Jack and Taylor’s worlds are upended, and their priority turns to finding their son.

The Silent Conspiracy is wrapped in tension and conflict on all levels and yet there are moments when a scene here or there stops the reader, because an outcome is just too convenient. It’s as if Shaw realized that she went down a path and came to a dead end, then had to construct a simple way out.

There is quite a bit of backstory regarding Taylor’s life before Jack, and also Jack’s life before Taylor. It’s almost as if the reader is being brought up to date on events in the previous book. Some of the backstory is important, some feels like it is too much.

Now, having said that, the premise is a good one, the tension is high, and the characters are well developed.

The end, however, is constructed to leave the reader hanging and with a desire to buy the next installment. Not a good wrap-up to the end of a good story.