Silence in the Library: A Lily Adler Mystery 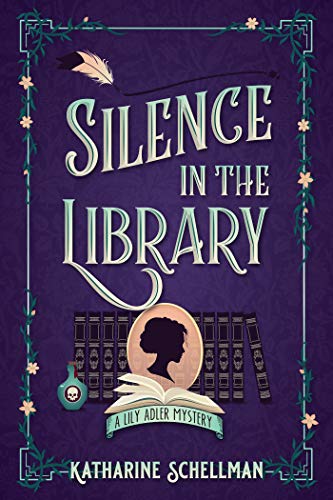 “Schellman produces a good premise and a strong cozy. Her setting in mid-19th century England with a strong woman who will not be intimidated by what others think, is refreshing for this genre.”

Widow Lady Lily Adler is the unusual 19th century woman, and that is much to her father’s chagrin. Lily solves crimes. She does not solicit their attendance, but they seem to find her anyway. With the help of her friends, naval officer Captain Jack Hartley, and her young friend, newly married Lady Carroway, there aren’t many questions about crime they can’t answer—or at least know where to find the answer.

Katherine Schellman starts the second story in her Lily Adler series, Silence in the Library with a great hook. Lily arrives home in London, to find chaos, as her father, George Pierce, has arrived unexpected and uninvited, and takes over the house as if it were his own.

Lily knows she is a disappointment to her father because she was not a son, and she is the only child. As hard as she tries, her father does not approve of her, her lifestyle, or her friends.

Lily discovers that he has arrived in order to visit an old friend, Sir Charles Wyatt, a widower of many years, who has recently remarried a woman much younger than himself. George disapproves but can not bring himself to express this to his lifelong friend. He knows that common social pressures require him to visit his friend and his new wife and congratulate them. He feigns sickness and delegates this job to his daughter.

Lily has known the Wyatt family for her entire life and so with this visit, Schellman introduces the reader to the remaining major cast: the new wife, Lady Winifred Wyatt; son Frank Wyatt, who is not pleased with a stepmother his own age; Percy Wyatt, Sir Charles’ nephew, a gadabout who has little respect for anyone outside of his own class, as well as few within his own class.

The characters all set, the only thing left is the crime, and that arrives quickly when Sir Charles is found dead in his library. Lily, of course, is on the scene shortly after the discovery, and she snaps into investigative mode quickly.

As the story progresses, there are other characters who arrive as possible murderers, but none fit the bill quite as well as Winnie, Frank, or Percy. This is one of the more creative things that Schellman does with her story—there are very few candidates, and she leaves the reader wondering if someone else will appear at the last moment (never a good idea in a mystery), or if one of these three is indeed, guilty, how does she lay out the clues for the reader to discover their true identity?

It should be noted that every cozy requires a police officer who does not like the meddling of a female detective, and the required police officer for this story is Simon Page. Page is a carryover from the first story, and although he prefers that Lily remain an arm’s length away from the crime, he has come to respect her and the help she and her friends give him—especially in high society where they move around more easily than he ever would. To her credit, Schellman does not make him a weak police officer.

Schellman casts red herrings, clues, and foreshadowing throughout the story with ease, and it’s up to the reader to discover which can be thrown out and which need to be considered in order to organize the crime and determine the real guilty party.

To this end, Schellman does an exceptional job. With so few suspects, how do we get to the bottom of the story? Schellman places Lily, Jack, and Lady Carroway in a variety of dangerous and curious situations from which they begin to piece together the puzzle of Sir Charles Wyatt’s death, but it is not until the end (as it should be) that she unfurls the identity to the surprise of the reader.

The only drawback to the story is how Lily convinces her father to help solve the crime. Schellman does not provide any details, and considering George’s disrespect for his daughter, this situation is the only weak link.

Schellman produces a good premise and a strong cozy. Her setting in mid-19th century England with a strong woman who will not be intimidated by what others think, is refreshing for this genre.

This story is fast paced, the characters are believable, the premise is a good one. A great read for a quiet summer day.