Signs of Life: A Memoir 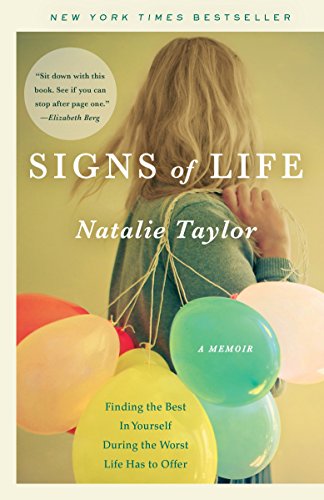 In the summer of 2007, Natalie Taylor was a happily married young woman about to have a baby and celebrate her two-year wedding anniversary with her college sweetheart, Josh. While visiting her sister, Ms. Taylor gets the news that Josh has died in a freak accident while carveboarding, something he had done a million times before. He fell backward and hit his head and died nearly instantly. Four months before the birth of her son, Ms. Taylor is shattered by loss.

What follows is an incredibly powerful emotional journey, as 24-year-old Natalie calls upon an inner strength she didn’t even know she had in order build a life for her and her son.

This memoir is a vivid and immediate story that shouldn’t have had to be written. Throughout the book, Ms. Taylor documents her life from the day of Josh’s death through the birth of their son, Kai, as she struggles in her role as a new mother where everyone is watching her for signs of immanent collapse—and she comes close many times.

“You know in the movies when people are screaming over a person who has just died, No, God, Why? Why Jimmy? Why now? And it’s very dramatic and intense? I always thought that outrageous reactions like that really did happen right after a person dies. But for me it didn’t. Then on July 28, 2007, less than an hour after my brother got married, I was alone in a gondola on Ajax Mountain screaming: ‘You should be here. You should be here. Where the hell are you? You should be here!’”

Ms. Taylor recounts the agonies and unexpected joys of her new life. There is the frustration of holidays, navigating the relationship with her in-laws, the comfort she finds and unlikely friendship she forges in support groups, and her utterly breathtaking, but often overwhelming, new motherhood. When she returns to the classroom, she finds that the honesty of teenagers can be more healing than Paxil.

Drawing on lessons from beloved books like The Godfather, The Catcher in the Rye, and talk shows she suddenly can’t get enough of, from the strength of her family and friends, and from a rich fantasy life—including a fairy godmother with attitude who guides her through her grieving—Natalie prepares for the birth of her son and her new role as a single mother.

This is a life-story filled with honesty, raw pain, and most surprisingly, a wicked sense of humor, told at a fast pace, perhaps to hold off readers’ tears—good luck with that.

An absorbing memoir about sorrow and growing up handled with such dignity and grace that you will forgive Ms. Taylor for making you cry.