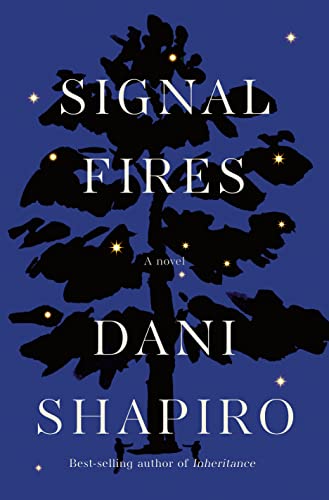 In Signal Fires, the character Mimi observes: “One incident is an invisible trip wire that in turn sets off another and another. Time collapses. There is no straight line.” Her observation perfectly articulates both the main themes and structure of Dani Shapiro’s beautifully composed, moving novel—a work that explores the impact of a terrible incident, family secrets, and community.

The dramatic opening scene of Signal Fires, which takes place in 1985, recounts a tragic car accident in the idyllic town of Avalon, a fictitious New York City suburb. The novel then examines the impact on the lives of Sarah and Theo Wilf, the characters who survived the accident, and those of their immediate and extended family and relationships.

The details of the fatal car accident become a Wilf family secret that none of them discusses. Interwoven with this story line is the narrative of the Wilf’s across-the-street neighbors, the Shenkmans, whose gifted, lonely son Waldo, is befriended by the paterfamilias Dr. Benjamin Wilf. Signal Fires examines the intersections of the lives of the Wilfs and the Shenkmans to illustrate the effects of secrets and miscommunication, and how, as Waldo explains, “Everything is connected. Everything.”

Signal Fires is brilliantly organized and constructed. Spanning from 1970 to 2020, the novel is arranged in chapters that are framed by time periods, though not chronologically. It opens in 1985, then moves to 2010 and jumps around certain key times through 2020, ending in 1970. Within each time frame are subsections of narrations about the main characters. Each narration, titled with the character’s name, is told in a close third person in the present tense. This gives each narrative a sense of immediacy and creates dramatic tension.

Dani Shapiro’s characters are deeply and beautifully developed. The close third person allows the narrator to get inside the heads of each personality, illuminating their thoughts and feelings at various ages and times of their lives. All the characters are rendered realistically and are psychologically complex. Shapiro deftly captures the mindsets of Sarah and Theo Wilf as teens and adults, of Mimi Wilf when she has Alzheimer’s, and of Waldo Shenkman, a brilliant future astrophysicist, who is misunderstood, friendless, and obsessed with astronomy when he is eleven years old.

For instance, after being punished by his angry father, Waldo runs away from home. Capturing Waldo’s fears and frustrations Shapiro writes: “That’ll show him. Waldo moves quickly down the front walk and—where is he going?—heads in the direction of North Elm. He pulls his hood over his woolen hat. Hunches down and makes himself smaller. His heart is beating fast. He doesn’t want to think about his mother. If he thinks about her, he’ll turn around and run home.”

The book’s theme of interconnectedness, which is somewhat heavy-handed, is most clearly articulated through Ben Wilf, a doctor, and Waldo, a budding astronomer. In 2010 Benjamin believes “that past, present, and future are a part of this pattern; that our lives intersect for fractions of seconds that are years, centuries, millennia; that nothing ever vanishes.” Toward the end of the novel, in 2020, when Benjamin and Waldo meet, the narrator concludes: “It looks as if the sea were filled with thousands upon thousands of flickering stars. Perhaps each one is what remains of every soul who has ever lived; perhaps time is not a continuum, but rather, past, present, and future are always and forever unspooling.” It is as if the narrator, speaking through the lens of Ben and Waldo, imparts the main idea of the novel that ontology recapitulates cosmology.

The conclusion of Signal Fires, which suggests that all lines converge, we are all interconnected like constellations, and are part of a cycle of birth and death, exemplifies both the novel’s strengths and weaknesses. Signal Fires is perfectly crafted and developed but is also, perhaps, a bit too neat.