The Siege of Brest 1941: The Red Army’s Stand against the Germans during Operation Barbarossa 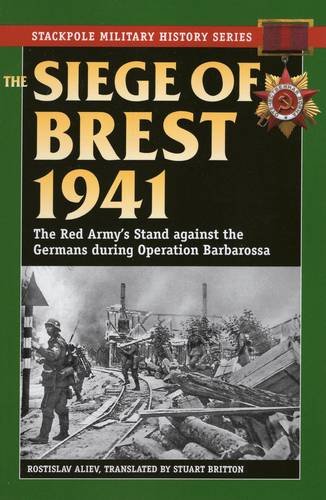 “a well-written and engrossing account of a World War II episode which has not necessarily seen the light of day . . .”

World history’s greatest military operation was Germany’s invasion of the Soviet Union: Operation Barbarossa. Contained within the nearly four years of brutal combat on that front are an infinite number of individual campaigns, actions, and incidents on which one might write. In this particular case, Russian journalist Rostislav Aliev, with translation by Stuart Britton, has chosen to recount the Red Army’s little known epic resistance to the German onslaught against the fortress of Brest on the invasion’s opening day.

Located on multiple islands at the confluence of the Bug and Muchavec Rivers on the immediate border of Poland and the Soviet Union, the fortress of Brest was built in the 19th century precisely for the purpose of blocking the direct route, through Minsk, to Moscow. Defended by conscripts, non-combat experienced units, and some veterans of the Soviet Union’s earlier war against Finland, that is exactly what happened. The German 45th Infantry Division, tasked with overrunning the fortress on the invasion’s opening day, found itself bogged down and frustrated in fulfilling its mission.

Contrary to the universal belief that the Soviet Union was totally unprepared and taken by surprise by the German attack, the author provides information that the Soviets did anticipate the enemy’s opening gambit.

Unfortunately, once the Germans commenced their assault, there was a lack of consensus as to whether this was really an attack or just a border provocation, intended to justify such an attack. In the event, those Soviet forces in Brest were provided no orders by their high command and any immediate, on-site leadership was also lacking. The result was confusion.

In spite of initial progress by the Germans, the Soviet defense did finally coalesce in the fortress’ casemates, bunkers, and tunnels. Considering the relative urban nature of the fighting, the resistance was such that it took the Germans nearly two weeks, until the first week of July, to overcome the opposition and finally secure and occupy the ruined fortress, having in the meantime prematurely declared the same to their high command on different days leading up to the final assault.

The Soviets managed their dogged defense as long as they did despite their initial surprise and confusion, numerous unsuccessful attempts to breakout and little or no medical care for the wounded. Perhaps worst of all was their maddening thirst, notwithstanding the inaccessible proximity of two rivers, and the stench of the mostly unburied corpses of both sides.

This volume is divided into three parts, each of which contains multiple chapters, and an epilogue. Part I covers the run up to the attack, Part II the assault itself and Part III is the mopping up. That being said, it should be approached with some caution. It should be noted that there are few notes, located at the end of some, but not all, chapters, no index and no bibliography, an explanation for which is found in the author’s introduction.

Considering the less than objective official Soviet “propagandized” version, most of the book’s contents are a result of research done by a previous Soviet writer, Sergei Smirnov, the collection of stories by Aliev from many of the now known surviving defenders and documents from German archives.

Consequently, one must keep in mind that this does not meet the historical writing standard that is expected in this genre and perhaps some of the material should be taken with a grain of salt as there is no way to check the author’s sources.

On the plus side, the front of the book contains five maps. The first map, with key, shows the Brest area and positions of the respective forces. The other maps, keyed as well, provide details on many of the buildings and areas of the fortress where much of the significant fighting occurred. The maps are definitely a highlight as one can refer back to them while proceeding through the text. Also, there is a 16 page photograph section showing many of the participants referenced as well as relevant scenes of combat and the fortress’ destruction.

Taking the caveat above into consideration, this is a well-written and engrossing account of a World War II episode which has not necessarily seen the light of day, the official Soviet version notwithstanding. It should be read by those who think the entire Red Army was a house of cards on 22 June 1941.