The Up Side of Down: Why Failing Well Is the Key to Success 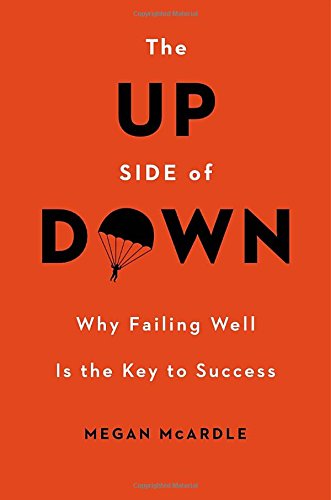 “The Up Side of Down: Why Failing Well is the Key to Success reminds us that although it’s a tough pill to swallow, failure is a necessary evil in reaping the rewards of success.”

Megan McArdle is a spectacular failure—or at least that’s how she describes herself in the opening pages of her latest book. With great wit and self-effacing prose, McArdle relates the rocky road that defined her professional life and the nearly impossible task of finding a stable job.

Plagued by bad timing, bad luck and bad choices, McArdle jokes about working for a rash of seemingly healthy companies who went bust four months later and laments the “deep soul-crushing periods of misery following stupid mistakes” that kept her awake until the early hours “in a fog of anxiety and regret.” A scenario no doubt familiar to many.

Yet like a phoenix rising out of the ash, these so-called failures would later yield important lessons, eventually lead to bigger and better things—including this very thought-provoking book on why it’s important to fail.

The fear of failure affects many people in many aspects of their lives. Psychologist who have studied people’s reaction to being asked to complete tasks or tests that they feel they aren’t prepared for, find that people will often self-sabotage or handicap themselves. For instance, a student who feels he or she won’t do well on a test will go to the movies that night before in order to blame their failure on lack of studying, rather than a lack of ability or intelligence.

McArdle’s look into how childhood perception often affects the adults they become features a very intriguing study featuring two groups of children are given a fairly simple task. After successfully completion of the task half the children were praised for being “very smart,” while the other half praised for “working very hard”. When the same groups were given a choice between another easy task, or a more challenging one, the hard workers always chose challenge, while the “smart” ones chose ease.

Another damage inducing phenomenon is also touched on: “Trophy Kids: the generation of kids who are taught that there are no winners or losers and that everyone gets a trophy with no effort required—you simply just have to show up.  While this school of thought might go easy on a child’s ego, it does nothing to provide them with necessary tools to help them navigate the harsh realities of the real world.

This practice has since spilled over into schools in the form of grade inflation, which has resulted in such things as “30–40 valedictorians at a single school” because “no one wants to make a distinction among the kids.” The propensity to coddle these past generations has created a situation in the work place where these kids are unable to take initiative, or anticipate needs. Instead they need specifically structured tasks and require constant feedback and encouragement, which is becoming a serious issue for management in the workplace.

Following a very informative focus on failures of the individual, McArdle turns to governmental and corporate failures and lessons, such as the epic bomb that was New Coke, the bailout of General Motors, President Obama’s misguided investment in Solydra, and welfare reform. The inclusion of the author’s own struggles, including a two-year stint of unemployment, helps to further humanize and put things into perspective.

Whether large corporation or an army of one, The Up Side of Down: Why Failing Well is the Key to Success reminds us that although it’s a tough pill to swallow, failure is a necessary evil in reaping the rewards of success.