An American Sickness: How Healthcare Became Big Business and How You Can Take It Back 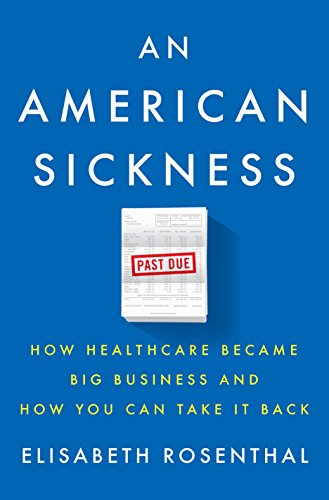 “patients can save thousands of dollars by purchasing An American Sickness by Elizabeth Rosenthal.”

An American Sickness-How Healthcare Became Big Business and How You Can Take It Back by Elisabeth Rosenthal is split into two well organized sections, the diagnosis and the cure for the terminally ill U.S. healthcare mess.

Section one illustrates the healthcare system’s ills and the impact of the MRSA-like infection of greed throughout U.S. health care. The national news organizations have covered the highway robbery of the pharmaceutical industry, but typically only the most egregious doctor-patient scams receive media attention. Amazingly, much of the rest of the systemic disease of gluttony has not been examined, until now.

Rosenthal uses her scalpel to debride the infection, revealing the complete oozing mess for us all to see. She astutely illustrates how insidious the money flows are throughout organizations that were never meant to be profit-making in healthcare including; public universities, nonprofit foundations, government agencies like the FDA, and hospital corporations, including the religious order nonprofits. This doesn’t begin to touch on myriad private sector companies marketing health care equipment, tests, or treatments with specious benefits.

Another tumor that has introduced itself into the health system lexicon is non-network services, applying to doctors, but also labs and physicians who work in your “in-network hospital” but are based out of a non-network facility—all for greater remuneration. Insurance companies are at the trough as usual, occasionally vexed by ambitious attorneys general in California or some other state that is paying attention.

Under the Obama Administration, insurers wishing to do business with the government through Medicare, Medicaid, or the insurance exchanges, had to agree to use 85% of their premium collections to pay claims. The Centers for Medicare and Medicaid use less than 6% to pay for their administrative overhead. Before the Accountable Care Act insurance companies could extract much more than 15% for their various reserves and other assurances to guarantee an easy profit.

Dr. Rosenthal links the conversion of the nonprofit Blue Cross/Blue Shield organizations to profit making behemoths in 1993, to their reduced interest in cost containment as the insurers make money based on total premium dollars received. Think of it this way, if you get 15% of whatever you take in, getting 15% of a bigger pie will be a bigger number, not to mention diversification of the risk.

According to Rosenthal, modern insurers are more concerned with “brand loyalty” than evidence-based payment for appropriate health services. Also, because most commercial insurers chose not to adopt the fixed fee DRG method of payment for health services, the gap between what the insurer will pay and what the health care provider will charge has become the Greenland ice shelf cleaving into the Atlantic. And this means the patient ends up paying much more out of their well-worn wallet, and those with no insurance are drawn and quartered by their health care facility of last resort.

One of the greatest revelations is the insolence of hospitals that refuse to provide cost estimates, itemized bills, and are increasingly ruthless on collections for surprise bills due to “non-network doctors, labs, and “facility fees.” The latter is a work-around for hospitals to make more money, because of the language in the Affordable Care Act.

Rosenthal observes that the number of Catholic hospitals increased by 16% between 2001 and 2011, primarily through acquisitions, while the number of public and secular nonprofit hospitals declined by 31%. Of the ten largest hospital groups in the U.S, eight are religious affiliations. For more startling assertions from hospital and university insiders you must read Rosenthal’s Rosetta stone on the current dominance of finance in health care decision making and not the patient.

It seems that no matter what Congress or the Centers for Medicare and Medicaid do to reduce overcharging for services, a swarm of consultants and lobbyists figure out a way to “optimize” the rules or circumvent the law to increase cash flows euphemistically known as “charge capture.” Hospital consolidations have created behemoths that control entire markets and even states, thereby able to dictate what they will charge without pushback. If your peptic ulcers are leaking acid into your stomach after reading this, have no fear, Dr. Rosenthal has some clear advice for health care purchasers to follow to avoid ripoffs and scams.

Rosenthal’s explanations of the three health system alternatives to the U.S. private sector mess are the cleanest and simplest explanations of alternatives to stop the hemorrhaging of cash from the present war wound. She lists ways to save money on doctor’s services, starting with unnecessary labs. Myriad examples are provided on doctor overcharging and how to avoid it.

Rosenthal explains how to vet your hospital, which in the era of $10,000 co-insurance limits, non-network price gouging, and facility fees, merits buying the book. Because much of the health quality information has been reviewed and is available to the public, Rosenthal concentrates on obtaining comparative price information in addition to quality metrics.

Because as a U.S. patient, the number one concern is likelihood of harm and the second concern is the cost. By adding a simple phrase to the “informed consent form” the hospital or doctor owned facility will require, health care buyers can save thousands of dollars. It turns out we don’t have to be sheep and can assert that for which we agree and that for which we do not give permission.

For example, observational hospital stays are often a method for hospitals to make more money, resulting in patients paying for unnecessary detention at a high cost. Either you need to be in the hospital or you don’t. Turns out you can refuse services, and more people will start doing this after they read this wonderful addition to their library. Rest assured not all doctors or health facilities will be cooperative and persistence will be required, but patients can save thousands of dollars by purchasing An American Sickness by Elizabeth Rosenthal.