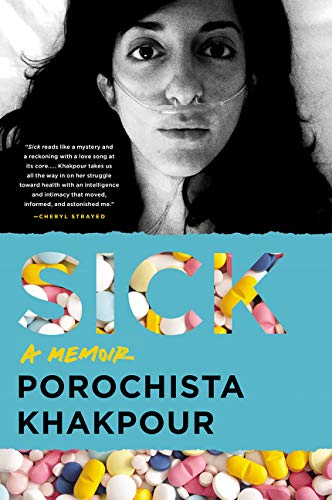 “a voyeuristic journey of discovery that is riveting and unforgettable.”

Porochista Khakpour’s new book Sick: A Memoir takes us into the confusing and frustrating world of Lyme disease. It’s written like a mystery, but a mystery in which in the first few pages you find out the butler did it. And then throughout the book there are musings about how the butler was noticed but not suspected, how he could have done it, how no one believed he actually did do it. But he did!

She tells us (on page one) she has late-stage Lyme disease and spends over $140,000 and 272 pages to tell us how she found out. The story is not told chronologically but jumps around in a way that mirrors the author’s state of mind.

The story is set in Los Angeles, New York, and Santa Fe. Khakpour is sick everywhere she goes. After fleeing Iran at the age of three, she and her family settled in Los Angeles. It never seems like a good fit for her, although throughout the course of this book she returns again and again to live there for various periods of time.

Then she goes away to Sarah Lawrence where she successfully gets herself addicted to cigarettes, “I took them to my dorm room and spent hours practicing in front of a mirror, smoking a quarter of a pack a day to ensure I’d be addicted in no time.” She also manages to get addicted to benzodiazepines and cocaine.

Santa Fe is the place where the author finds out for sure that the butler did it. “Porochista, you have Lyme disease,” the doctor tells her. It wasn’t the first time she’s heard this, but this guy assures her it’s absolutely true. Yay! She now has a dance card full with “an IV regimen of glutathione, Myers, C drips, peroxide, major autohemotherapy, plus procaine neural injections.” And apitherapy. This involves getting dozens of bee stings on her head and a breakfast that includes royal jelly, propolis, and pollen.

Khakpour not only deals with illness, but also with PTSD, racism, drug addiction, alcoholism, depression, thoughts of suicide, and a tumultuous love life.

All throughout she has friends who support her, a mother who more than once comes to her aid, and her dog Cosmos, a black poodle who suffers silently along with her.

Unlike many illness memoirs, there is no inspirational ending or satisfying conclusion. She is sick and remains sick and claims her identity as a sick person. “I am a sick girl. I know sickness. I live with it. In some ways I keep myself sick.” She is not exaggerating nor does she care what you think. She smokes, she drinks, doesn’t exercise, doesn’t sleep. As she says, “I am not a poster girl for wellness.” We accept her brutal honesty and at the same time cringe at her choices.

This memoir is about her Lyme disease not her life. It’s all Lyme all the time. So it’s shocking to find out that Khakpour is a recipient of the 2012 NEA Fellowship in Creative Writing and has also received fellowships from the Sewanee Writers' Conference, Northwestern University, the Virginia Center for the Creative Arts, The Ucross Foundation, Yaddo and Djerassi. She’s written two novels, and she teaches. How is this possible?

How does she manage to get all these fellowships and grants while spending so much time in the hospital? When she’s out of the hospital she’s snorting, drinking, shooting, and smoking. She spends days in bed. She is unapologetically needy. Judging from this memoir she has very little life outside of her Lyme disease.

Khakpour addresses this issue. She is in a psychiatric holding unit and tells a young nurse to look her up. The nurse comes back in tears and says, “My God, you had a whole life.”

Khakpour writes, “I nodded and nodded, bobbleheaded, ecstatic, devastated. But it was the first time I had broken through a bit, been offered a mirror image that finally made sense no matter how simple: a human who had a life. This is who I am, I thought, a real person, an achiever person, a person whose intelligence had driven her, not a train wreck, a child, a drama queen, a hypochondriac, a basket case. No one is just those things, and sometimes no one is those things at all.”

She is right: no one is “just those things,” but you can’t help but draw that conclusion after reading Sick because she writes almost exclusively about just those things. Even the passages about her relationships focus on her partner’s response to her illness. She mentions her writing life here and there the way one might mention the weather.

But in the same way that you can’t take your eyes off the scene of a horrible accident, you can’t stop reading Sick. Even when she writes about headaches, nausea, auditory hallucinations, insomnia, fevers, and pilar cysts, which ooze a “white toothpaste substance,” she is an engaging writer.

“People came in and out and visited me, but everyone saw the same sight. I was locked in for months—me and my dog in an embrace, trembling on my red couch, which used to look like a pretty voluptuous tomato to me and now just looked like a bloody swollen organ.”

She perfectly describes the frustrating experiences of misdiagnoses, our broken medical system, chronic illness, and the disbelief of that illness.

Yes, we know right off that the butler did it, but the author takes us on a voyeuristic journey of discovery that is riveting and unforgettable.

Debra Jarvis' most recent book is It's Not About the Hair: And Other Certainties of Life & Cancer (Sasquatch Books) was nominated for a Washington State Book Award. She is a hospital chaplain whose writing gives voice to people who are not otherwise heard.