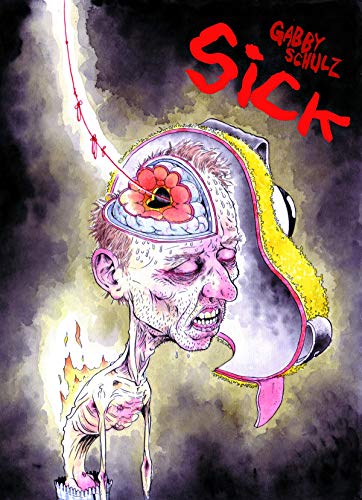 One day Gabby Schulz came down with a bad fever. The end result was Sick, published by Secret Acres. It chronicles 15 days “of physical, mental, and societal collapse.” During the worst of it, his colon was passing “something the color and consistency of V-8 juice every two hours.” What follows is a vicious indictment of the American healthcare system, United States history, and Judeo-Christian morality. Schulz combines hallucinatory, nightmarish images with scathing satire. The narrative drives forward with a punk musicality, every tirade ending with a snarky punchline.

One page encapsulates Schulz's pitch-black wit. He asks, “Why live?” He receives three answers. A little old lady says, “Because killing yourself is such a selfish act.” But there is an aside, “Even though rampant human overpopulation and overconsumption are literally destroying the planet.”

A middle-aged white man with a trucker cap and sizable paunch says, “Because every human life is precious and sacred . . . unless you're gay, in prison, Muslim, or working at a Planned Parenthood.”

A preacher with his eyes bugging out screams, “Because Sky-Daddy's magic book says so!!” But that isn't the punchline. The punchline comes from the blindfolded hippie as he gallivants around a toxic wasteland littered with human skulls, “Because who could choose death in a world full of so much beauty and wonder . . . for the rich 0.00001% of us rich, white and self-absorbed enough to enjoy it!” American history and Christianity receive the same merciless treatment.

While the traditionalist and conservative receive scathing rebukes, Schulz sharpens his teeth on the goggle-eyed, oblivious members of the self-satisfied Left.

What makes Sick attain literary greatness is its measured tone. Schulz does not preacher to the choir. He also preserves enough levity in the narrative to avoid sounding like a shrill one-note scold. It is a balance that can be a challenge to pull off. Despite a dark tone and a bleak outlook on humanity, Sick provides funny and touching moments. It humanizes what would otherwise be a political broadside or a maudlin confessional.

Schulz bravely informs this indifferent world about growing up as a lonely artistic weakling, picked last for sports and picked on for liking to draw. It works to humanize this cantankerous, belligerent, and cynical narrator. He is the product of everything that is right and wrong about American civilization. “And if this is the life we've made for ourselves. Then what a fitting punishment to live it.”

Schulz, born and bred in Hawaii, currently resides in Chicago, Illinois. Sick is the quintessential graphic novel for this violent, demented, and hypocritical epoch of American history. The aggression and anger in the images and the text place Sick in the proud history of no-holds-barred satire, a lineage that stretches from Jonathan Swift to William S. Burroughs.

The line work is reminiscent of cartoonists Ralph Steadman and Gerald Scarfe. This dark night of the soul, stretched out to an agonizing two weeks, is both fever dream and carefully pitched rant. Schulz can stand in the pantheon of American comic ranters like George Carlin, Bill Hicks, and Alexander Theroux.

In this chronicle of sickness, body horror, and political atrocities, a sincere wisdom can be found.