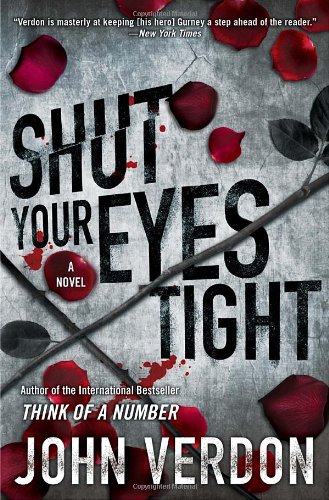 “As incredible as it seems, a relatively new author with no law enforcement background has created a protagonist with insight and skills that rival the best crime solvers of all time. . . . a fantastic read. One that dares you to put it down.”

As incredible as it seems, a relatively new author with no law enforcement background has created a protagonist with insight and skills that rival the best crime solvers of all time. John Verdon obviously knows how to reach people. He’s a former advertising exec from New York who routinely had to get into the minds and hearts of a target audience for his clients. He uses that same skill to lead his readers into a complex web of characters and impossible situations that seemingly have no solution.

Consider Shut Your Eyes Tight’s protagonist, Dave Gurney. “Murder investigations captured the fullness of his attention as nothing else in his life ever had. That was the good news. It was also the bad news.”

That passage from the book sums up Gurney’s life, both while with the NYPD as a crack homicide detective and in his much too early retirement from the force. Gurney’s wife persuaded her husband to leave the department for a pastoral retirement homestead in upstate New York. But relaxing is not part of the former investigator’s DNA. He never fully extricated himself from the quicksand made of murder, mayhem and evil people intent on savage acts of brutality.

The author has created myriad subplots and a plethora of interesting, complicated characters that will fascinate and puzzle even the most ardent mystery aficionados who pride themselves on their ability to solve conundrums quickly. The plot twists are as perplexing as trying to figure out why teenagers act as they do. They seem irrational and nerve wracking. Ironically, that’s what makes this book a fantastic read. One that dares you to put it down.

Shut Your Eyes Tight is a story with all of the elements true mystery fans have come to expect: Murder, sex, sadism, conspiracies, shoddy police work followed by extraordinary investigative analyses, and of course, the threat of harm to the protagonist’s family. Throw in a constant underlying tension between Gurney and his wife during what was supposed to be their time together in blissful retirement and you’ve got a pot of excitement about to blow its lid.

I give John Verdon high praise for his work. His second novel is masterful, like trying to find your way out of a giant maze but repeatedly taking a turn that only leads you further from the exit. I was exhausted by the end of the book—but in a good way. Protagonist Dave Gurney is the type of character who belongs on the silver screen . . . hint, hint. Now I can’t rest until I’ve read Mr. Verdon’s debut novel, Think of a Number.