Shrinking the Earth: The Rise and Decline of American Abundance 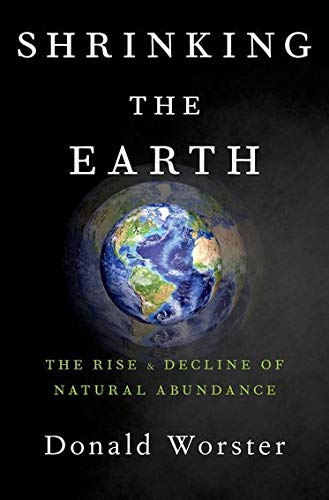 Modern science allows us to experience the vastness of space with our own eyes. The images of far galaxies produced by the Hubble space telescope are awe inspiring. At the same time, science permits us to see atoms on the surface of silicon carbide crystals with an electron microscope. The images are only 0.05 nanometers in size.

Seeing things that are so far away or so infinitesimally small may help us understand where we sit in the scheme of things, but they do not offer a useful perspective for comprehending economic, social, political and environmental matters. Those who offer projections of what we might face hundreds of years from now ignore the fact that we will all be gone by then. That makes it difficult to focus. Similarly, those who now examine daily or hourly occurrences ignore the reality that the passage of time may tell a different story. We need a measured perspective on things.

Take, for example, the issue of the use of our natural resources, as Donald Worster does in his remarkable book on environmental history, Shrinking the Earth: The Rise and Decline of American Abundance. Unlike strident conservationists who preach about the coming disaster of climate change, Worster simply explores how Western civilization has come to this fork in the road. He uses the work and the writings of the last 500 years. Worster cautions us—as Daedalus warned his son Icarus—not to fly too close to the sun, but it is a temperate caution, not a strident one.

We were fooled five centuries ago by the “discovery” of the “Second Earth,” as Worster calls it, the Western hemisphere. Natural resources in North and South America appeared to be limitless to European settlers. They would not run out, but, in fact, they are in the process of doing so. There is no “Third Earth” to discover. Through his enlightening discussion of the literature, Worster explains how we finally recognized that nature had limits.

We can already see the effects of limited resources and climate change on our environment. We desecrated our land digging for coal by surface mining and polluted our seas searching for oil. The ice caps of the North are melting, and the streets of Miami are already flooding. We need neither an electron microscope nor the Hubble telescope to see these changes.  We need the historical and global perspective that Worster provides.

Politically, we seem to be caught up in a game of blame. Was this impending disaster and the limits of growth manmade? It should not matter who is at fault, if that stands in the way of taking the action now that the situation demands.

It is extraordinary that, in the face of the uncontested facts, we seem incapable of facing the reality Worster describes: “The industrial way of life might not be in any imminent risk of collapse, but neither was its material foundation becoming more secure than before or the challenge of meeting human demands becoming less daunting.” We cannot ignore what we must confront.

The lesson to be learned from Worster’s thoughtful exposition is that a micro-analysis of our condition using an electron microscope will ignore the dynamic nature of the problem. It might take millennia to produce more oil, but humans are capable of adjusting, especially if there is a profit to be made. Likewise, even the Hubble telescope cannot see the future. The long-term is a protracted series of short-term events. We should do what we can in interim not to make matters worse.

The Trump administration has rejected the worldwide agreement among all nations to reduce the effects of climate change. His government also seems unlikely to make any effort to address the material limits of the planet. It is doubtful that EPA Administrator Scott Pruitt has even heard of the Worster’s book.  It should be on his required reading list.

We don’t know when it will become too late to save our planet and ourselves. Hopefully, it is not too late to reverse the profound environmental immorality of the current Administration. Anyone who has visited China, India, and Russia knows the effect of valuing growth over clean air. Years from now our grandchildren will ask how we could stand to one side and watch the global environment deteriorate as our resources dissipated. It cannot be said that we did not know what we have done and what we continue to do.

Shrinking the Earth is a brilliantly crafted discussion of the limits imposed by our natural reserves, combining historical analysis, economic development and political decision making. Worster has the rare ability to present complex ideas in an easily accessible manner. He fills his book with the stories of the people who brought us both riches as a society and a body of ideas we can use to make us healthy again.