Shrink: A Cultural History of Psychoanalysis in America 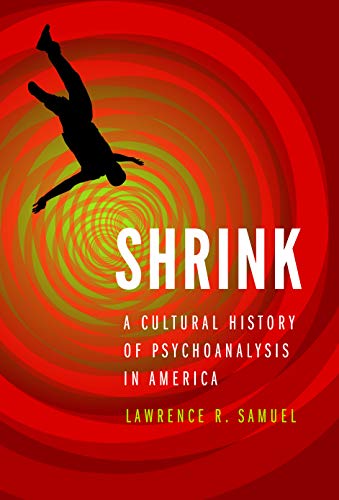 If you
• are interested in the unconscious,
• like interpreting your dreams,
• enjoy literature but the movies even moreso—Hitchcock in particular,
• watch The Sopranos and In Treatment
• fantasize about the couch or are currently experimenting with it
• above all, find psychoanalysis intriguing, maybe brilliant yet also amusing in a way
then you will probably enjoy Lawrence Samuel’s book Shrink: A Cultural History of Psychoanalysis in America.

Many books have already been written about Freud and psychoanalysis. Indeed, the elderly Viennese gentleman represents one of the major inspiration figures of the 20th century, and as Mr. Samuel’s book proves, the interest in him does not look like subsiding. On the contrary, that it has survived this long despite crazed idolization and even crazier censure suggests that the science he invented is more than just a fad.

The distinctiveness of Shrink lies in its focus on popular culture.

Mr. Samuel is not so much interested in the academic discourse on psychoanalysis and the various theoretical contributions to Freud’s work. The fact, however, that he does not ignore these completely lends credibility to his analysis. The question driving his book is rather how psychoanalysis became so “deeply embedded” in American popular and consumer culture.

The media, later also the movies, played a significant role in this process and, therefore, Mr. Samuel’s decision to systematically rely on print sources was a good one. His sources include serious journalism and science writing but also entertainment literature like women’s magazines.

By tracing what has been reported in the media about psychoanalysis over more than a century, a pretty good picture emerges about the field’s fascination but also the main contestation areas.

The hype days were the 1920s, and it felt like love at first sight. The reason was a three-letter word, namely sex, “against the background of changing mores and women’s emancipation.” People were keen to both have it and talk about it, and psychoanalysis appeared to make both possible. As Lawrence Samuels notes, that was a rather “too basic” understanding, under which psychoanalysis as a science subsequently suffered.

Thus demand for psychoanalysis grew faster than the supply of psychoanalysts, and this led to the unfortunate situation of self-assigned analysts popping up everywhere, charging some $30 USD per hour, already then a huge amount, for the provision of “talking cure” that was more talking (about sex) than cure.

The medical profession was the first to react to this state of affairs when it began in the 1930s to provide training within its ranks. That might have been important for the short-term professionalization of psychoanalysis.

The downside was that for the next 60 years it became impossible to divorce it from psychiatry, and that despite Freud’s own views on the subject.

Psychoanalysis continued to gather momentum in popular culture throughout the twentieth century, and gradually it also achieved high status within the humanities in academia. But otherwise, namely as a science in its own right and as a form of therapy, it’s been more like an uphill struggle.

There are four main reasons for this. The first was the aforementioned subjugation of psychoanalysis by psychiatry, which was removed only in the late 1980s when the American Psychoanalytic Association began admitting non-medical candidates. (A few years later, gay candidates also became eligible for training.)

The second was the constant challenging of its scientific status in conjunction with the epistemological or normative attacks from the strangest of bedfellows, namely the Vatican and second-wave feminism.

The third constraining factor had to do with competition as new cheaper and shorter forms of therapy emerged taking advantage of some of the horror stories about psychoanalysis floating around since the 1960s.

Finally, the biggest blow came from advances within pharmacology.

And yet psychoanalysis has survived and it looks like it might again be on the ascent, this time as a science and as a form of therapy. There have been internal reforms. One has already been mentioned, namely the admittance to the profession of non-medics.

Equally important has been the revival of research in the effectiveness of psychoanalysis, alone or in combination with other treatments and in a comparative perspective.

Finally, there is now available the so-called psychoanalytic or psychodynamic therapy, which is based on psychoanalysis but requires less sessions (per week and over time).

By far the biggest boost has come from neuroscience. The rapprochement between the two fields began in the 1980s when known neuroscientists came forward in favor of Freud arguing that they expected his theories to be confirmed by their research on the brain and the workings of the mind.

The predictions have been largely confirmed and more seems to be under way. Another potentially useful alliance is that between behavioral therapy and psychoanalysis for the treatment of specific mental disorders.

So much for the serious stuff, which Lawrence Samuel’s book describes very well. But an American book on America and psychoanalysis would not be complete without the extras: the retelling of horror and wonder stories that made news in the 1950s–1970s; the review of the popular terms that emerged to capture the psychoanalytic moment—from getting “psyched” in the 1920s to “hitting the couch” in mid-century; the discussion of films dealing with psychoanalysis; the treatment of the topic in women’s magazines, etc. etc.

Last but not least, since “to sofa is to suffer,” what couch an analyst buys is also of importance—and that story is also among the many Shrink has to offer—an additional incentive to read this book.