Shrines of Gaiety: A Novel 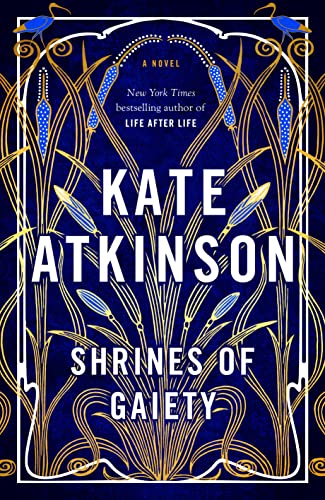 The tale begins in 1926: “Is it a hanging?” a boy asks as a crowd gathers outside Holloway prison. No. Everyone is waiting for the release of the infamous Nellie Coker, who—to much fanfare—departs in her Bentley and retakes the reins of her empire and her devious family.

Two teenage girls—Freda and Florence—run away to find fame on the London stage but instead plow headlong into a series of disasters, with Florence disappearing into an unknown car. A friend of Freda’s half-sister, Gwendolyn, a librarian, is tasked with finding them and unites with Detective Chief Inspector Frobisher “of the Yard,” who is on loan to clean up police corruption and to solve the mysterious killings of young girls. Frobisher’s wife is mentally ill, and as Gwendolyn is implanted into Nellie’s employment, a romantic spark is lit between the detective and his “spy” but also between Gwendolyn and Niven, Nellie’s oldest son. Trouble abounds.

In an interview, Atkinson says, “she knows the beginning and end” when she starts a novel but lets the plot unfold as she types, i.e. she shuns “wall charts” or the like. Considering the complex confection the author has created, this is an impressive feat. Mystery puzzlers will be enthralled with the intrigues and schemes interwoven around the colorful cast, with a resolution that neatly ties up the novel’s many strands.

No review of an Atkinson book would be complete without mentioning the author’s trademark puckishness. Considering the story’s dire happenings, she manages to insert bits of dialogue or narrative that are brilliantly funny, such as:

“Nellie disliked flowers, considering them to be too needy.”

About beef stew in prison: “a rancid dish that had never met the cow it claimed to be acquainted with.”

She is particularly sardonic about Nellie’s daughters, Betty and Shirley, who “had much time for thinking. The ‘life of the mind’ was a waste of both life and mind as far as they were concerned . . .”

Describing his date for a party, Ramsay says to Shirley, “‘She’s a Bright Young Thing’” [a famous society group in the 20s]. Betty replies, “‘She’s not in the least bright.’” Shirley adds, “‘She’s not even that young.’’’ To which Betty responds, “‘Just a thing then.’”

“Lying came easily to Niven, he thought of it as a means of protecting the truth.”

“. . . a strange little hat gave the impression that a blackbird had landed on her head and died there.”

As Atkinson frequently does, she takes pokes at religion. In the Catholic church, “a large crucifix [was] hanging above the altar . . . It was an execution really . . . It may as well have been a man hanging from a gibbet, in Freda’s opinion. Gruesome.”

“‘You’re such an ignoramus, Kitty,’ Betty said. ‘Am not!’ Kitty protested, under the misapprehension than an ignoramus and a hippopotamus were close relatives.”

Describing a flat: “The occasional slight whiff of dead rat entombed in the wall added an unpleasant top note.”

Not since Martha Grimes or the earlier author Georgette Heyer has there been a writer who has successfully leavened crime with humor in such an engaging fashion. Kate Atkinson’s work includes stand-alone novels, such as Shrines of Gaiety, and the renowned series, beginning with Case Histories, that features private investigator Jackson Brodie—all highly recommended.

Kate Atkinson is a writer’s writer and a reader’s absolute pleasure. Brew a pot of Pekoe or splash some tonic in a glass of gin and enjoy this captivating story told by an author at the zenith of her powers.