Showtime at the Apollo: The Epic Tale of Harlem’s Legendary Theater 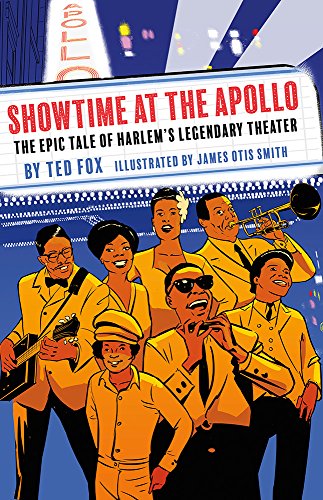 "‘The truth of the Apollo's great history is the stuff of which myths are made.’"

Welcome to the Apollo Theatre, which is celebrating its 85th anniversary this year.  Sit back, relax, and enjoy the cartoon drawings and dialogue on every page. They'll make you laugh or cry, sing or dance. It stands behind a gaudy sign on West 125th Street. Across the street, you might notice people selling their wares from trucks. Although the Apollo doesn't look very fancy or modern, many famous singers and actors got their start at there. Elvis Presley and the Beatles were among its visitors. Even the former President of the United States, Barack Obama, sang a song on its stage while he was campaigning.

Ted Fox and James Otis Smith have written and illustrated a graphic novel about the trials and tribulations of this legendary theatre. Ted Fox himself is in this book as one of the characters, interviewing people about their connection with the Apollo. “The truth of the Apollo's great history is the stuff of which myths are made.”

The authors also paint a picture of the fights and rip-offs that went on backstage. One such incident is the time that Cab Calloway accused Dizzy Gillespie of shooting a spitball at him. Dizzie stabbed Cab in the butt with a penknife. Eventually, they patched things up and became best friends.

"It was home, too, for the people of Harlem, where a night out at the Apollo was something special. The Apollo was an indispensable part of the community." It featured the best of swing, bebop, rhythm and blues, jazz, gospel, soul, funk, dance and comedy It was the one place where African Americans were given a chance to perform. For a dime, one could sit there all day. The Apollo always fought against racism and segregation and accepted black culture. The political climate of the time is an integral part of the story.

The main reason for the Apollo's success was the strong belief in the motto: "The show must go on." But its story begins before the opening in 1934. Between the end of WWI and the Great Depression, there was a Harlem Renaissance. It became fashionable to perform at swanky clubs for the white community. Blacks were barred. In 1934, Sidney Cohen opened the Apollo Theatre and Frank Schiffman hired the musicians. Eventually, Frank became co-owner and this venue remained the only theater in Harlem. But it was not always a smooth ride.

On March 19, 1935, the store across the Apollo was accused of beating a black shoplifter. This led to rioting and looting white businesses. Some were killed and hundreds wounded. "The rioting is a one-day event. But the economic and social factors behind the rampage reset the cultural stage as white infatuation with Harlem wanes . . ."

The theater's mystical allure attracted visitors from all walks of life. Some dressed in evening gowns while others were in work clothes. Everyone looked forward to an evening of pure entertainment at a reasonable cost.

But the seminal attraction was its Amateur Night. Audiences would cheer, boo, or walk out if they didn't like the performer. "Much of the fun at Amateur Night is watching some poor soul fail miserably." It was one of the few theatres where audience approval would either make or break the entertainer.

Ella Fitzgerald got her start on amateur night when she was 15 years old. Other musicians included the Jacksons, Billie Holiday, James Brown, Diana Ross, and Stevie Wonder and Pearl Bailey. An Apollo Amateur Night Winners Hall of Fame was created. Some of the winners were Pearl Bailey, Ruth Brown, Billie Holiday, James Brown, Jimi Hendrix, and Charlie Parker. "Of the major black attractions that are working today, 30–40 percent were launched at the Apollo's Amateur Night." Lionel Hampton's band was so popular that the crowds followed the musicians right out of the theater and onto the streets.

The 1940's are known as the birth of bebop and the musicians' union. Then came a new age of war. It affected everything. Nearly one million African Americans served in WWII. Many white bands traveled by train but black bands were restricted by racist Jim Crow from trains in the south. These world events affected bands around the country. Although there were fewer gigs, the Apollo kept open and complimentary tickets were set side for the soldiers. They also entertained the servicemen at the United Service Organizations.

The Harlem newspapers reported that black servicemen were being beaten by white soldiers in the south. On Sunday, August 1, 1943, a riot broke out in Harlem. It was the worst that Harlemites ever experienced. Hundreds of white businesses were gutted and hundreds were wounded. At least six were dead. "It was the hottest hell ever created in Harlem."

As the ’40s came to a close, the entertainment scene began to change. Comedy came to the Apollo at the same time that the vaudeville variety format declined. Rock and roll started in the ’50's with Buddy Holly and Elvis Presley.

At the same time, discrimination against blacks was increasing. But the music sustained them. They expressed their feelings and told their stories in a new genre called rhythm and blues. At the same time, musicians were making recordings of their songs and disc jockeys were playing them on the radio. "The rise of the disc jockey may be one of the few times in the history of industry where men replace machines."

The author relates the strong connection between art and politics. The civil rights movement, the riots, and the push for integration of the blacks with the whites had a devastating effect on the Apollo Theatre. Eventually it was forced to close. However, it opened again with a new owner who revived Amateur Night.

This graphic novel is an adaptation of the definitive epic tale and only history of the Apollo by Ted Fox and James Otis Smith, titled: Showtime at the Apollo: The Story of Harlem's World Famous Theatre.

An entertaining and captivating read for those interested in African American history, its culture, and pop music.