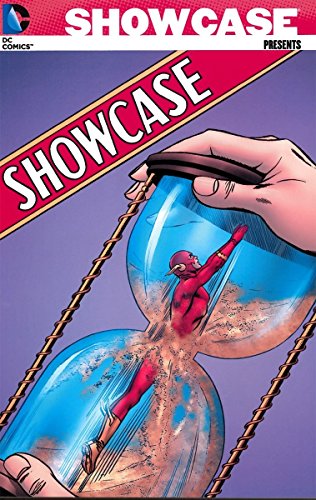 “. . . ranks among the best in an already exceptional series.”

Showcase Presents, DC’s long-running reprint series, has just released a new anthology featuring the comic book that gives the series its title, Showcase. This massive, 500-plus page anthology reprints in chronological order the first 21 issues of that classic.

There is no better bargain in comic reading than a good copy of Showcase Presents. And DC’s Showcase Volume 1 is among the best in the series.

In order to offer readers as much as possible for their money, DC has chosen to reprint the stories without color and without ads. Reading these stories in such a stark, crisp, clean presentation is always a revelation.

Seeing the artist’s work without color opens up a new world of detail and storytelling. This beautiful presentation is just one of the reasons this newest addition to the Showcase Presents series is such a neverending joy.

Here, in one single volume you have such hardcore comic classics such as The Flash, The Challengers of the Unknown, Rip Hunter . . . Time Master, The Sea Devils, Lois Lane, The Space Ranger and Adam Strange. This is a well-rounded world encompassing superheroes, science fiction, and TV sitcom-style shenanigans.

Many of the stories reprinted here feature the very first time these characters appeared in comic book form. There is also a wild assortment of tales including everything from real-life firefighters to a fighting bear that can throw a perfect uppercut.

This is an anthology that can be enjoyed by the hardcore fan and a brand new reader. The stories, each one written in the mid-1950s and beautifully illustrated by many of the greatest legends in the industry are also very family friendly.

The comic book title anthologized in this volume, Showcase, arrived during a time of massive uncertainty in the comic industry.

The idea behind Showcase was to serve as a way for DC to introduce readers to new concepts, new ideas, new characters—all in an attempt to lure disappearing readers back to the newsstand.

The need for a title such as Showcase didn’t come about in a vacuum. The 1954 Senate Investigation of Juvenile Delinquency in The United States had dealt a near-death blow to the industry. Publishers were scrambling for something readers could latch onto.

Hardcore horror comics such as those published by EC or Harvey were gone, as were most real crime titles—many of them featuring a violent world of their own construction. War comics became less graphic and Westerns followed suit. A new, considerably milder day had suddenly arrived in comics.

This only compounded the fact that at the end of WW II comic publishers had already begun losing readers. The most popular ones—Superman, Wonder Woman, Batman—survived but still lost readers. Some superheroes were able to hang on until 1950 or so, but for the most part, capes were gone.

For a while horror and romance helped stem the tide, but that pesky Senate Committee, with help from a few dubious sources, nearly killed it all. All that was really left on the newsstands were a few superheroes, monsters born of Atomic accidents, and some funny animals.

DC needed a way to attract new readers with new ideas, so it came up with the variety concept found in Showcase.

Showcase Presents: Showcase Volume 1, opens with the first three issues of Showcase. Each one holds true to the promise of something new each time out. Issue #1 opens with stories about firefighters, including a new character, Fireman Farrell.

The second issue reaches back to mix the feel of classic Jack London with a mid-fifties TV mentality (the stories are centered on tales of wild animals). The third issue features a brand new underwater team, The Frogmen. The stories are firmly rooted in the innocence of the era. The ideals are clean, and there is never any doubt about who the hero is or what is right.

Then Showcase essentially saved the comic industry with the next issue. They did it by doing something that hadn’t really been done before: They rebooted a hero about 40 years before the idea of repurposing became the norm.

Today the idea of rebooting a concept, a hero, or a good character for a new generation is the norm. 2012 alone brought new Spider-Man and Total Recall movies, the new Spider-Man himself being a reboot of something barely seven years gone by.

That number seven is actually ironic when discussing Showcase, for that exact time span also figured in the logic of DC’s 1956 decision to reboot a classic hero from World War II.

At the time Showcase arrived on newsstands comic publishers believed comics themselves gained and lost a generation every seven years. Some feel this approach to readership may have been adopted from the folks at Disney who were in the habit of rereleasing their classic films to movie screens every seven years for the exact same reason: garnering a new group of fans.

DC, admittedly desperate for something new, performed the first and possibly the most important reboot in modern comics history. They looked backward toward the Golden Age of Comics (think 1939–1945) and came upon a hero called The Flash.

In Showcase #4, cover dated September/October 1956, the editors at DC gave the old tin-hatted, smiling speedster—who had once fought during The Big One overseas—a space age update. They made him modern.

The uniform was streamlined; bumbling sidekicks and trick dogs were gone. The new Flash’s origin was much more plausible. In one of the best editorial decisions ever made in comics, the new Flash acknowledged the past by taking his name directly from comics he had read as a kid featuring the original WWII Flash.
As the sales numbers floated in, well after six months of release, DC was amazed: The first reboot of what comic fans now call The Silver Age, was successful.

Fueled by the apparent success of the new Flash and the Showcase title, DC reformats and relaunches other WWII era heroes. Eventually the publisher of Marvel (Atlas) Comics gets wind of this and asks a guy named Stan Lee what he can do to get a piece of DC’s publishing pie. The rest is history.

Every story in this volume serves as a perfect example of how the comic industry rebuilt itself for a new generation. While the stories as they appear from issue to issue are essentially unrelated, there is a very subtle historical thread moving through them.

It is the wonder of an industry coming back to life after a near-death experience.

The artists featured in this volume are among the most legendary. Work by Jack Kirby, Carmine Infantino, Joe Kubert. Al Plastino, and Gil Kane feature prominently. You feel as if you are looking over the shoulder of the artist working on the story before you.

Seeing their pencils in such a pure state, often inked by noted artists such as Wally Wood, Joe Giella, and Frank Giacoia only adds to the experience.

Showcase Presents: Showcase Volume 1 ranks among the best in an already exceptional series.

A quick side note: Many readers have seen this series on TV every week and may not even be aware of it. Various Showcase Presents titles line the bookshelves of the characters in hit TV show “The Big Bang.” Look for the color perfect book spines the next time you watch it.