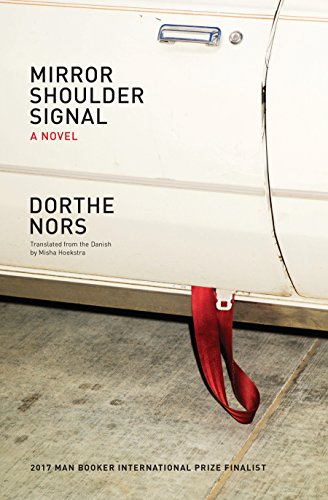 Readers familiar with Man Booker Prize winners will quickly realize why Dorthe Nors’ novel, Mirror, Shoulder, Signal was a 2017 finalist for the international prize. Like many others recognized by the highly respected award—Anita Brookner comes to mind—her novel is sparse but powerful.

While there’s not much plot, the characters are finely drawn, offering deep insight into human nature, especially if they are marginal. Readers come away with an appreciation for the troubled protagonist, along with a deep respect for skilled writing that exposes frailty coupled with incipient intelligence in the carefully drawn main character.

Sonja is a lonely, unfulfilled woman in midlife who is self-critical, fearful, and passively angry. On top of that she suffers from a disorder that renders her dizzy if she moves her head too quickly, especially when she needs to be observant. The problem is, like so much in the book, symbolic. Sonja finds the world dizzying. She is easily overwhelmed by detail and what she perceives as demands. Everything becomes a blur so that rather than look around for solutions, she must remain still, eyes down, until an episode passes.

The fact that she is having great difficulty learning to drive provides the ultimate metaphor for her life. Sonja just can’t seem to shift gears; she is terrified of being squeezed between powers great than hers (like tractor trailers on a major highway); she must remember to look in the mirror (to see what’s threatening her from behind), to look over her shoulder for pending disasters, and to signal to others the direction she wants to take.

Her first driving teacher is harsh and alarming. Her second one is, she thinks, coming on to her. Mostly, she wants nothing more than to escape them, her masseuse-cum-guru, her friend, her unresponsive sister, the spy novels she translates, and the overbearing city of Copenhagen. At the same time, she is desperate for meaning in her life. She wouldn’t mind a bit of romance, too, but she’s given up on that.

Nors writes with clarity, insight, warmth, and humor. Here she describes Sonja wandering around an amusement park by herself. “A vast exchange commences between the earth and the sky. A barrel organ grinds and one-armed bandits prattle away in tongues electronic, but in the background, Sonja hears a throb. The sulfur in the sky dissipates and turns purple . . . then here comes the lightening. The people squeal and seek shelter under the terrace roofs. They say, ‘Sure is muggy.’ Nothing’s as cozy as thunder, Sonja thinks.”

That kind of nuanced writing, laden with meaning (taking place in a potential downpour), is what makes Nors’s writing special. Here she is using that skill to share what draws us to Sonja, thinking about herself. “She’s afraid of not believing and she’s afraid of believing, and she remembers how, several years ago she went into the church back home. She just wanted to sit a bit . . . it was nice to let go of things and then gamble that Something Bigger was listening…Something Bigger about the feeling of not being able to fill her life in the right way. It was pleasant, Sonja remembers. There was something reassuring about sitting there and trusting someone besides herself.”

Sonja is clearly on a journey and it’s not an easy one, even when she is in the proverbial driver’s seat. There seems to be no one she can ask for directions, and that heightens the sense of vulnerability she feels doomed to suffer for eternity. Her only solution, she thinks, is to talk her way out of anxiety. “Speech has horsepower and direction,” she ruminates to herself. “With speech she can do what she can’t do with the car . . . if she just jabbers away, she’ll become a person.”

By the time Sonja’s story comes to an end, light at the end of the tunnel she is navigating seem possible. Nors leaves readers with at least a sense that whatever comes around the next bend, somehow Sonja will cope. Even her distant sister would likely be relieved by that.