A Shot in the Dark: A Constable Twitten Mystery 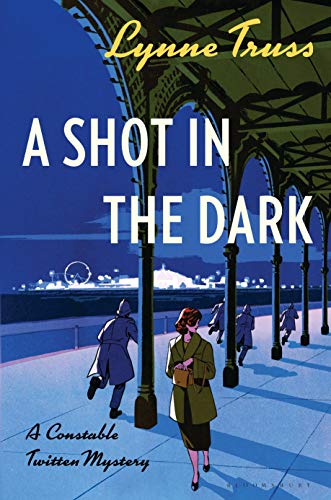 “A comedy of criminal errors with a Monty Pythonesque flavor, written with the author’s tongue firmly implanted in cheek.”

It’s Brighton, 1957, and the resort is a peaceful place, thanks to the diligence of Inspector Steine of the Brighton Constabulary, whose decision to take his squad out for ice cream allows two crime families to wipe out each other while the minions of the law enjoy their treat.

Steine has rested on the laurels of that event for six years now and doesn’t intend for disorder to again take hold; in fact, it’s his belief that if crime is ignored, it’ll simply go away. He’s certain if any criminal element exists in Brighton, it’s because of the influence of the characters in Graham Greene’s novel Brighton Rock.

“Steine loved the law but found the entire concept of criminals morally repugnant. Policing for him was about upholding the law and protecting the public, not dealing with unprincipled louts who would shoot you as soon as look at you.”

Steine has had only one failure and that is the Aldersgate Stick-up but no one talks about that.

Sergeant Jim Brunswick isn’t so certain Steine’s attitude is the way to go. Being a paratrooper during the war and accustomed to danger, Brunswick wishes to go undercover, ignoring the fact that every criminal still residing in Brighton knows what he looks like and most of his informants have absolutely nothing to inform.

“If it weren’t for Sergeant Brunswick constantly trying to expose criminality in Brighton, Steine would be more than happy with his lot.”

When Brunswick isn’t dreaming of the day Steine grants his request, he’s vying with Ventriloquist Vince, a Brighton boardwalk entertainer, for the attention of Maisie, a teenage temptress with a penchant for lollies that turn her tongue exotic colors.

Into this complacent milieu comes Constable Peregrine Twitten, bright-eyed and bushy-tailed (not literally) and smarter than both his superior officers put together, so smart in fact, he’s spent most of his very young career being transferred from station to station.

“Twitten had been a super-brain all his life, and thus, he found it difficult to interact diplomatically with people slower-witted than himself, especially when they were in positions of authority. It was astonishing how often they took offense when he explained things to them.”

Brunswick is halfway receptive to the newcomer, however.

“How do you feel about criminals?” Brunswick demanded.

“I wholeheartedly oppose them, sir,” Twitten said. “Don’t you?”

“A mixture of unfamiliar emotions appears on Sergeant Brunswick’s face, his usually pained expression giving way to amazement, disbelief, and most unfamiliar of all, hope.”

When A. J. Crystal comes to town to review a play at the Theatre Royal, Steine isn’t happy. Crystal was on the staff of the bank robbed in the Aldersgate Stick-up and was so traumatized he quit his job to become a theater critic. He also is a reminder of Steine’s one failure.

“I could have been shot that day at the bank and you did nothing!”

“Well, I wish you had been shot, you odious man!” Steine called after him, for all to hear. “Right now I wouldn’t mind shooting you myself!”

Fortunately, someone beats him to it.

In order to further avoid Crystal, and get Twitten out of the way for a while, Steine gives the constable his ticket to the performance.

Twitten is sitting next to Crystal when he is shot and killed during the play’s first act.

“What happened next would always be unclear. It wasn’t the sort of thing that happens to most police constables on their first day. Twitten temporarily lost sight, hearing, everything, but instinct made him stand to turn and face the auditorium. The curtain came down and as the audience rose like a flock of pigeons, Twitten put his whistle to his lips, and blew.”

Thus unravels a series of events seemingly unrelated that will eventually be reassembled into a brand-new ball of string, of impersonations, missing manuscripts, phrenologists, love found, love lost, and a certain young constable who may or may not have solved both the Aldersgate stick-up and the murder of A. J. Crystal, if only someone would believe him.

Adapted from the author’s British radio series, A Shot in the Dark is a terribly chatty novel proceeding in such a leisurely fashion and with such an influx of seemingly unrelated information that the reader at first may not recognize it as a droll and witty satire of the English cozy novel.

There may be some Britishisms with which American readers are not familiar. Taken in context, the meanings can be guessed, if not entirely clear, so open the book, sit back, and enjoy.

A Shot in the Dark is a comedy of criminal errors with a Monty Pythonesque flavor, written with the author’s tongue firmly implanted in cheek. One hopes that author Lynn Truss will present us with more of Constable Twitten’s adventures, if only in a set of four as was the radio series.