Shot All to Hell: Jesse James, the Northfield Raid, and the West's Greatest Escape 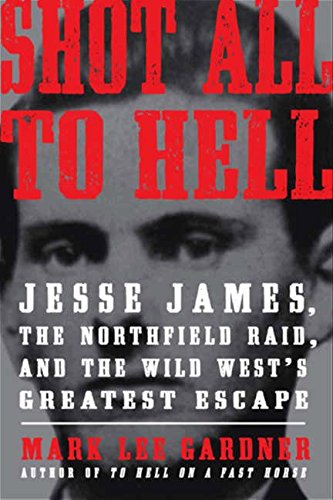 “. . . the kind of compelling narrative that all historians should emulate.”

“The dirty little coward who shot Mr. Howard and laid poor Jesse in his grave” are lyrics to familiar to any student of western history or those who are fans of outlaw tales. Mr. Howard was the alias used by Jesse James when he was murdered by Bob Ford in 1882.

An account of Jesse's murder is included by Mark Lee Gardner as part of the aftermath of the infamous James-Younger outlaw gang's raid on The First National Bank of Northfield, Minnesota, in 1876. It is not the focus of Mr. Gardner's superb history.

Shot All to Hell is a day-by-day, in some cases hour-by-hour, account of the James-Younger foray into Minnesota after the state of Missouri becomes, in slang terms, too hot for comfort. “It was plain to the James-Younger gang that they needed to get away from Missouri for a time. Money was not a problem; they just had to decide where they wanted to go.”

“Jesse's many letters to the press show that he saw himself as a top leader of the gang,” although Cole Younger might have disagreed. Cole Younger and Jesse James both had more ego than was good for either one. Cole in his later years told “of how he and Jesse nearly “shot it out” once, only to have Frank and others intervene.” Given his less than amiable relationship with Jesse, it is remarkable that none of the Youngers revealed that the James boys were the two bank robbers who got away.

It is one of the very few documented cases of honor among thieves.

According to Mr. Gardner, Jesse probably persuaded the gang to make Minnesota their hideout as it was unlikely anyone would recognize them, there were many brothels and casinos in St. Paul and Minneapolis, and the state “also offered lots of fat banks . . .”

There was another reason for Jesse's choice of Minnesota. Sam Hardwicke, the lawyer from Clay County who had participated in the Pinkerton raid on the Samuels farm that killed Jesse's half-brother and maimed his mother, had fled to St. Paul. Jesse aimed to look him up.

The First National Bank in Northfield was not the first choice for the gang; they actually planned to rob the bank in Mankota, but an unusual crowd scared them off. So they rode to Northfield and into popular history.

Mr. Gardner's meticulously researched history of the Northfield raid and its bloody aftermath is told in the kind of compelling narrative that all historians should emulate. Not a word more than necessary is used to draw a clear and detailed picture of not only the eight members of the James-Younger gang, but of those whose lives were touched, or in some cases, ended by the outlaws.

These were not nice men, not at all the romantic, honorable figures that many novels and films claim them to be. Of them all, Cole Younger is closest to likeable, but you wouldn't ever have turned your back on him.

Mr. Gardner uses primary sources, enumerating the ones he consulted for each chapter in detailed notes at the end of the book. All dialogue in quotation marks is taken from those primary sources.

A principal criterion for judging histories, whether written for the general reader or the academic one, is how much of the research is comprised of primary sources and how much on secondary sources. Mr. Gardner earns an A+ for his research and an A++ for his writing.

Shot All to Hell is one of those very well researched, wonderfully written, and clearly objective histories that any reader will enjoy.