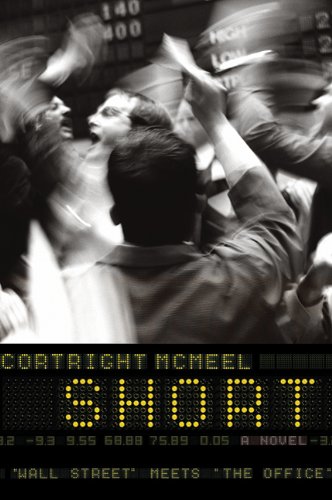 A good writer can make any scenario dramatic—even short-selling the summer electricity market in Texas in 2005.

That doesn’t sound like the stuff of a vacation page-turner? Well, a group of people always on the edge, at risk of losing millions of dollars plus their jobs, is indeed a solid place to start. Throw in booze-soaked flings that dash from casinos to a deep-sea fishing boat to a gun range with an assault rifle, a hooker, and a midget bartender, often via Cadillac. Another reliable plot point is the arrival of a smart, vengeful, and unprincipled boss into a settled community. So Cortright McMeel has plenty to work with in his debut novel, Short.

The main plot line is actually fairly narrow—the unprincipled boss’s attempt to ruin a rival trader—but the trading world itself provides strong dramatic possibilities and background color. McMeel, a former commodities broker and energy trader, gives readers an inside look at things like the relative clout of traders, brokers, and weather forecasters. If this is how we get our electricity, it’s amazing that there aren’t more blackouts.

Still, no matter how many craps games and martini-making midgets, there is a serious literary risk in basing a book on something as arcane as energy trading. Readers may enjoy the prestige of getting the inside scoop and picking up some jargon, but they have to keep track of how Joe Gallagher’s secret plan to buy weather derivatives will affect his marching orders to mismark the forward curve, and whether Milt Harkrader can juggle those plans with Stan Couch’s intention to “short the summer and September contracts . . . or sleeve the trades, if you have to” without anyone knowing about the front-running, and at a minimum of 150 MW per day. If the Ghost gets the Colonel to help sell down the market, will he need Gallagher to execute a short Cinergy spread?

While the booze and shouting are exciting, it’s hard to follow the stakes, even with a handy glossary at the back. (McMeel could have included a few more terms in that glossary, such as “sleeve the trades.”)

A bigger problem is the characters. Modern novelists long ago dispensed with heroes or even sympathetic main characters. Fine. Let everyone be a jerk. It creates more color and drama.

However, a good novel will have a variety of jerks. In Short, everyone seems to be the same kind of jerk: a fat loser, drinking too much, eating unhealthy food, dribbling grease on their shirts and chins, and going to strip clubs. How can a reader tell them apart? The Colonel is an ex-Marine. The Ghost is legally blind. Gallagher likes to read about history. (This apparently makes him a cut above the others and therefore the main character.) Milt has a somewhat wimpy son. That’s just not enough individuality.

Plus, there are a half-dozen secondary characters and another half-dozen less important ones who form somewhat of a Greek office chorus—all of them with similar jerky traits. Yes, traders have a reputation for being foul-mouthed Type As, but do they all drink too much, eat unhealthy food, dribble grease on their shirts and chins, and go to strip clubs? (see above)

Despite all these (pardon the pun) shortcomings, Short is definitely a fast, fun read. And the ending redeems many of the faults. Traders, it seems, will always find a trade.