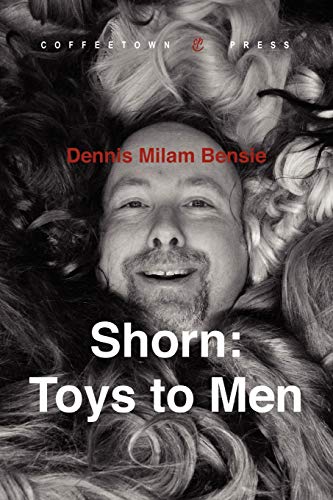 “Mr. Bensie’s decision to focus his memoir nearly exclusively on his sexual demons makes Shorn, on the one hand, a frank discussion of behaviors that few have ever discussed so honestly, and, on the other, an uncomfortable read. Mr. Bensie bares all and dares the reader to deal with it.”

As children, we are all received numerous lectures about the virtue of honesty. But is there a line beyond which honesty becomes a problem? Can an overabundance of honesty cross that line and become lurid, or even creepy? With his darkly honest memoir, Shorn: Toys to Men, Dennis Milam Bensie sets out to find that line and dance on it.

Mr. Bensie describes a very difficult life. He was born to an ill-prepared teen mother who didn’t have the means to raise him, so he was given to loving but stiff adoptive parents. As a little boy, he was sexually molested by a babysitter. Effeminate from childhood, he endured years of ostracism and terrible bullying from small-minded male peers. His parents and therapists tried to help but were hindered by similar small-mindedness.

As a young adult, Mr. Bensie broke free, went to college, and eventually made a career for himself in theater. Amid all of this, he gradually came to understand his gay identity, but was plagued by sexual tastes that ranged from harmlessly kinky to downright outré.

These obsessions lead him into difficult circumstances in which he or others were frequently hurt: a failed marriage to a woman who deserved better, a rape by another man, an attempted suicide, physical altercations, financial problems, and years of therapy and unhappiness. A few scenes are too sexually explicit to mention in this review.

Shorn is not a balanced depiction of Mr. Bensie’s collective experiences or talents, and this is disappointing in some ways. He writes in an informed journalistic voice and proves him a subtle chronicler of modern Americana. His anthropologies of the places he’s lived—Robinson and Carbondale, Illinois, Chapel Hill, Daytona Beach, and Seattle—show an essayist’s sensibilities—but these observations are offered only in snippets.

Mr. Bensie’s theater career, no doubt, gives him abundant material for a memoir—but only a few of these anecdotes make it into Shorn. For better or worse, Mr. Bensie is primarily interested in documenting his psychosexual challenges.

At the end of Shorn, Mr. Bensie describes being helped by a therapist. She successfully identifies his condition—paraphelia—and helps him move toward more normal social interactions. He narrates the successes and challenges of taking antidepressants and a Freudian epiphany linking his haircutting obsession with painful childhood memories of his father.

Shorn concludes with cause for optimism as Mr. Bensie gets control over his fetishes. But because this comes so late in the book (the last 30 pages of a 270-page memoir), the hopeful outcome is little more than a footnote to the predominant reader experience.

Mr. Bensie’s decision to focus his memoir nearly exclusively on his sexual demons makes Shorn, on the one hand, a frank discussion of behaviors that few have ever discussed so honestly, and, on the other, an uncomfortable read. Mr. Bensie bares all and dares the reader to deal with it. But the ultimate audience for Shorn is probably Mr. Bensie himself—his memoir is his exorcism and hopefully the final step in purging his demons.

We all have demons of one kind or another, and Mr. Bensie’s bare-all discussion of his demons is bracingly honest and admirable. But at some point, the litany of sexually-explicit stories in Shorn became repetitive. The author’s honesty was trumped by the law of diminishing returns. Either Mr. Bensie or an experienced editor should have hacked 70 pages out of this book. Shorn could have been a well-conceived memoir—in addition to being an honest one.