Shooting Vietnam: The War By Its Military Photographers 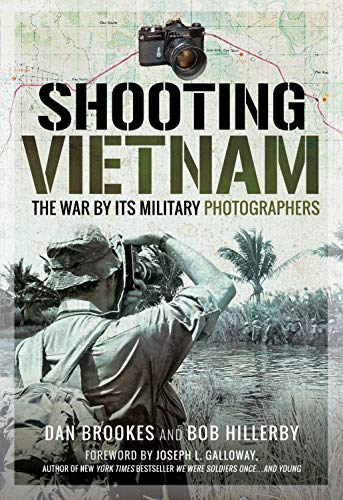 “The combat photographers whose stories are told in this book occupy a unique place in the history of the war, both chronicling and participating in some of the major actions of the war while trying to capture the essence of life for the average GI.”

Vietnam was one of the best chronicled wars in American history with the advent of television, satellite communications, and almost instantaneous battlefield reporting bringing the war home to millions of Americans every night.

As part of the effort to both build support for the war and record the actions of troops in the field, the U.S. Army sent out combat photographers to capture soldiers trying to survive a daily routine of patrols, ambushes, and booby traps.  The authors, both combat cameramen, have written a combination of memoir and photo essay, using a multitude of official and personal photos from the war, to tell a compelling story of the American war effort from the GIs’ view.

The role of photographs and photojournalism in the war was, of course, quite controversial as both sides attempted to use reporting and photographs to bolster domestic support for the war effort. As the authors note, the military in Vietnam operated under much less censorship than in previous wars, and the flood of images showing the grim realities of combat were likely a factor in turning American public opinion against the war.

The photographs in this volume are not, as the authors note, of sweeping battles or triumphant victories. Mostly they are of small groups of infantry, often in vicinity of the ubiquitous helicopters that symbolized the war, conducting dangerous missions such as clearing the networks of Viet Cong tunnels or engaging in combat as the result of ambushes.

The photos, many stored unseen in government archives for years, and others private photos never before published, show the daily life of GIs during some of the most turbulent years of the war. The authors spent a great deal of time in the field, embedded with GIs during some of the heaviest combat of the war, the 1966–1968 battles known as “search and destroy” missions that sent hundreds of GIs sweeping into Viet Cong strongholds to engage the enemy in close combat.

These photographers were also soldiers and often wielded weapons as well as cameras in many of these firefights. In addition, the authors spent a good amount of time with our allies in the war, Australia, New Zealand, and South Korea and have some fascinating pictures of their infantry and artillerymen in the jungles or at their fire bases.

The authors also spent a bit of time in Saigon and other South Vietnamese towns and cities and have a number of fascinating photos of civilians trying to lead something resembling a normal life in a war zone.

Finally, the authors end with some of the more important reporting and photojournalism of the war, the war crimes at My Lai and other places where American troops were accused of massacring innocent South Vietnamese civilians. These photos, more than probably any other shot during the war, brought home to Americans the ugly nature of the war in Vietnam where it was challenging to tell friend from foe and where civilians were often killed by both sides.

Like some Vietnam veterans, the authors are conflicted about their service, generally proud of the work they did and the buddies they served with, but cynical about the war in general and the military overall. Both of these authors moved on with their lives after their military service, reuniting via a veterans website decades later to compare experiences that led to this book. The combat photographers whose stories are told in this book occupy a unique place in the history of the war, both chronicling and participating in some of the major actions of the war while trying to capture the essence of life for the average GI.