Shoot the Conductor: Too Close to Monteux, Szell, and Ormandy 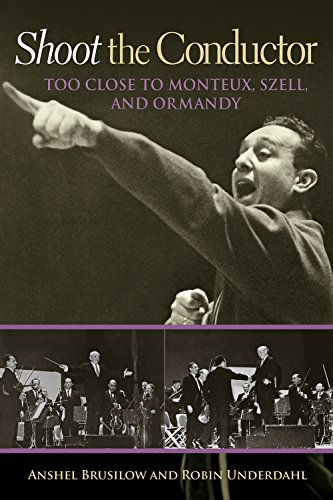 “This is a book to be inhaled not just read.”

Shoot the Conductor: Too Close to Monteux, Szell, and Ormandy by Anshel Brusilow and Robin Underdahl starts out good and rapidly moves to Great, with a capital “G.” Any individual who enjoys classical music will thoroughly enjoy this autobiography.

From the very beginning, there is a sense that Anshel Brusilow was destined to succeed as a violinist, a concertmaster, a conductor, and finally a teacher. The reader who knows little or nothing about classical music will quickly learn that these avocations overlap and weave together in a multitude of ways.

As Brusilow talks about the successes he enjoyed as a young boy and an adolescent, one does not get the feeling that he is bragging about himself. He is simply relating the facts of his life—the fact that he enjoyed early successes that continued to blossom as he matured are given to us as moments in his life—nothing more.

One of the joys of reading this book is laughing out loud at Brusilow’s sense of humor. He paints pictures of his own missteps due to a certain overenthusiasm. As he talks about his several educations in the second chapter, he relates a time when he realized, “In order to join a military band, I needed to learn a different instrument.”

At the urging of his friend, Jimmy Chambers, he got a French horn. Thinking it would be easy to learn, he took it home and experimented, much to the dismay of his father, who, upon hearing the sounds emanating from Brusilow’s bedroom, rushed up the stairs and yelled, “Anshel! It sounds like you’re killing a horse up here!” One can only imagine the difference between the strains of a violin and the screeching of a French horn played by an inexperienced player!

His chapters are written in short snippets of information and while at times he seems to wander for a brief moment down one path or another, he quickly returns to the topic at hand, and these wanderings are informative to his overall story. His transitions from Monteux to Szell to Ormandy to life as a conductor and teacher are seamless.

His description of interpretation of music is probably one of the most fascinating aspects of this autobiography. In his remembrances of working with Szell, he talks about Szell’s natural feel for German composers, but “playing French music . . . was a little strange. You couldn’t see the satin and lace, the candlelight reflected in silver serving dishes.”

This perspective throws a whole new light on listening to music. He talks about the intense relationship between the musician and the composer, regardless of how many hundreds of years may separate them. These interpretations flow throughout the book.

The journey that Brusilow takes us on is breathtaking, as he introduces us to famous musicians and often provides us with asides that bring a chuckle. He enlightens the reader to the fact that classical musicians, concertmasters, and conductors are also human and relax with such mundane activities as card games, baseball, and golf!

He is gracious in both the compliments and criticisms he puts on Monteux, Szell, and Ormandy, while it is clear that his relationship with Eugene Ormandy brought him the most pleasure, it, like those with Monteux and Szell ended on difficult terms.

As Brusilow’s story leaves the discussion of these three men and begins the road to his own successes, he talks about the challenges he faced as a conductor first of auditioning over 1,000 musicians to fill 36 positions at the Chamber Symphony of Philadelphia, then the further hurdles of management. Previous dealings with management had eluded him, and now in the role of conductor, he had to wrestle with the details of things like scheduling and musician placement.

Every chapter in Shoot the Conductor reflects on Brusilow’s growth as a musician, concertmaster, conductor, and finally as teacher. His transitions from one position to another were smooth—even on the bumpiest of roads.

With success often comes defeat, and so it was with Brusilow’s experience with the Dallas Symphony Orchestra’s board of directors. His retelling of the experience of being fired at that time is done with grace, and not a little bit of disappointment.

In finishing this autobiography, he speaks of working with students at North Texas State University. “The sweet center of a professor’s life is influencing how students see themselves and music.” He clearly examines the difference between working with experienced musicians, and young people who frequently needed “five music-free minutes when they reverted to the world of words.”

Brusilow was often rewarded with success stories of students who were not successful musicians, and how grateful they were that he told them that music was not their destiny. They progressed to other, more promising roads in life—still successful in their endeavors because he took the hard line with them. He speaks with fondness of his last role as teacher, and the dual opportunities that brought for him to help talented students learn, while at the same time, learning from them about other forms of music.

When he discusses the challenges of teaching students to understand the intricacies of music; he floats back to his own experiences with Monteux, Szell, and Ormandy and reminisces about the learning processes he enjoyed with each of those men.

And yet the final chapter is a reflection on his life and music . . . classical music, and the friends he has made along the way as well as his ventures into modern music and that learning process.

This is a book to be inhaled not just read. Its humor, poignancy, and disappointment crackle through every line in the book.  This one belongs on every bookshelf, whether the reader is an aficionado of the classics, or one who enjoys listening just doesn’t know why—this book will educate and amuse.