Sheva's Promise: A Chronicle of Escape From a Nazi Ghetto (Religion, Theology, and the Holocaust) 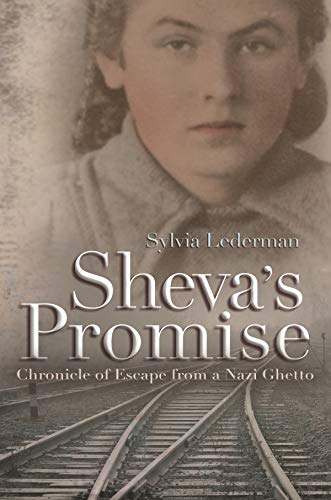 “. . . the instinct for survival overpowers all other emotions.”

Sheva Weiler was born in Rohatyn, Poland, where she lived with her mother, Gitel, and her younger sister, Rose. Her father died when the children were young, leaving Gitel to raise her two daughters. Sheva is the strong one, taking care of Rose like a mother while working full time in a bookstore.

Sheva’s Promise begins with the vivid hopes and dreams that all young people possess. In 1939, when the German Army captures this town, they immediately begin to murder innocent Jews. Most of the Jewish men are rounded up, forced to dig a huge trench, and are then machine-gunned into it. Those not killed immediately are buried alive. Observing this, Sheva realizes that to remain in Rohatyn is to face certain death.

Sheva’s family is forced to live in a squalid ghetto, deprived of food, fuel, and freedom. There they face pogrom after pogrom, bringing rape, robbery, and murder into the ghetto. The Jewish population is constantly reduced.

Rumors come in from concentration camp escapees that a vast genocide is being committed against Jews all over Europe. The Jews of Rohatyn learn about Jews in other ghettos being burned alive. Soon they hear of massive Nazi gassings and cremations at concentration camps. Jews are no longer just persecuted in Poland. They are exterminated.

Sheva cannot persuade her mother and her sister to leave. But her survival instinct is too powerful. One heartbreaking day Sheva departs Rohatyn with Christian identification papers given to her by a generous Polish woman. In doing so, she faces death at every street corner as a Jew with false papers and no travel permit.

As she leaves, Sheva’s mother makes her promise something. “You must survive to tell the world what happened to the Jews here,” her mother pleads. “Above all, never forget us and never forget what the Nazis have done to our religion.”

Sheva escapes, walking among Nazi troops, the SS, and the Gestapo in strange towns and cities, bereft of safety and shelter, carrying a few precious keepsakes. Her new Christian identification papers are all that stand between her survival and death. She falls very seriously ill twice.

In a nearby city, a family named Krupka gives Sheva shelter and protection. She pretends to be a Christian nanny for their child. The Krupkas do this at the risk of their own lives. Over many months, Sheva is protected by the Krupkas, who occasionally are able to obtain news from Rohatyn. The news is always bad.

Finally, Sheva decides to leave. She cannot tolerate the thought of being caught by the Gestapo and having the kind Krupka family sent to prison or worse.

Riding a train to a nearby city, Sheva sits again amongst her enemy. Each railway station is crowded with German soldiers who would be happy to shoot her or send her to a Nazi death camp.

Many times she sees emaciated and brutalized prisoners wearing striped pajamas forced into rigorous labor on construction projects. She is certain they are Jews.

Sheva eventually finds protection in a work camp posing as a poor, uneducated Polish woman. The camp commandant finds Sheva’s identification papers to be false, and he wants her dead. But a very kind doctor saves her life and provides shelter.

Eventually, Sheva moves to Stuttgart Germany, all the while maintaining her Christian identity. She is employed in a hospital run by nuns. There she receives a letter from Mrs. Krupka bearing bad news. The Jews of Rohatyn had been forced inside of buildings which were then burned to the ground by the SS, killing everyone inside, including Sheva’s mother and sister.

Ms. Lederman’s writing style is passable but exhibits underdeveloped literary skills. Her character development is truncated such that the plot is more memorable than the people involved in it. For instance, there is little detailed information about the personalities of Sheva’s father, mother, and sister, making it hard to be as affected by their deaths as we should be.

Yet the book adroitly describes WWII Poland and Germany. Tracking the journey of a Jew hiding in the midst of Nazis during the holocaust provides a harrowing and memorable read. We can clearly feel Sheva’s defiance and her compassion as well as her enthusiasm for life and love of family.

The memoir is enhanced by a few pictures inserted into the middle of the galley. Certainly these pictures of Weiler, her parents, her sister, the Krupka family, and a nun from the hospital she works at later in the war in Stuttgart enhance the reading experience. Perhaps the addition of maps, pictures, battle lines, diagrams of the cities and towns where Sheva was able to hide, to accompany the story as it follows the progression of the war might make the book even more enticing.

Holocaust survivors often feel guilty for existing when their loved ones have been murdered. And many of them feel ongoing guilt for being forced to perform brutal acts upon innocent people.

Yet the instinct for survival overpowers all other emotions. This is the central theme in Sheva’s Promise.

We also gain a measure of respect for those righteous gentiles who hid and saved the lives of Jews at the risk of their own lives or the incarceration of loved ones. This is the true spirit of humanity. While many Europeans were only too happy to turn in their Jewish neighbors, some, like the Krupka family, risked their own lives to help a Jew.

Sheva never forgot her mother’s last request to survive against all odds and tell the world about the genocide of European Jews. She fulfills her promise superbly.