Sherlock Holmes and the Beast of the Stapletons 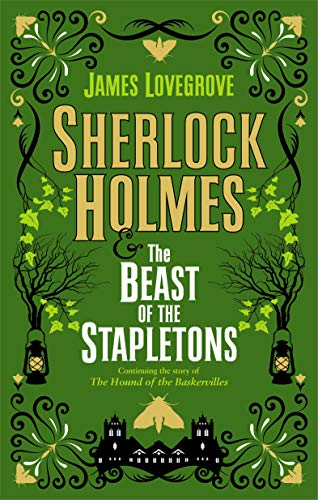 “Lovegrove has taken familiar characters from a much-loved story and created an intriguing maze with twists and turns and dead ends that all culminate in a surprise ending.”

At first glance, diehard Sherlock Holmes fans won’t like the idea of a different author than Sir Arthur Conan Doyle picking up the gauntlet and writing a new Holmes mystery. And they certainly won’t like the idea of taking one of Doyle’s most fanciful stories and continuing the premise. To those fans it should be said, “wait a minute, not so fast.”

Yes, Sherlock Holmes and The Beast of the Stapletons is just that, a continuation of the famous Hound of the Baskervilles but it should be noted that author James Lovegrove has done an admirable job of taking the characters from the original and weaving a whole new story around them.

The story is told in three parts, primarily in Dr. Watson’s words. In Part One, Sherlock Holmes is approached by Corporal Benjamin Grier with a problem. His friend, Sir Henry Baskerville, recently lost his wife Audrey to a horrific death—her body was exsanguinated of all its blood. Only two small puncture wounds could be found on her body—with no other signs of violence.

As Corporal Grier explains it, his good friend is beyond solace over the loss. Left with a three-year-old to raise without the help of the child’s mother could prove to be a major challenge. Grier is convinced that there is something foul in the woman’s death and seeks Holmes’s help to resolve the issue. Knowing of Holmes’ previous experience with the Baskervilles, Grier is certain he can count of the detective’s help.

Holmes asks Dr. John Watson, no longer living with his friend and now running a successful medical business of his own, to join the undertaking, but Watson turns down the offer. Not because of his business, but because the nightmare of the adventure five years earlier remains with him and he is unable to bring himself to return to Dartmoor and Baskerville Hall.

Holmes and Grier attend to the problem, with Holmes’ promise to bring back the details to Watson, and within a week Holmes returns and conveys to Watson the events that occurred.

In Part Two Holmes relates in detail his adventure to Watson and reintroduces already well-known characters—the Barrymores, servants at Baskerville Hall are met as Holmes and Grier arrive. They are leaving because of Sir Henry’s violence and rage about his wife’s death. Their departure leaves no one to serve the Hall except Sir Henry and Harry. It takes some maneuvering, but Holmes and Grier are able to meet with Sir Henry and promise to learn the truth about Lady Audrey’s fate.

Dr. Mortimer, who previously played a part in resolving the problem of the hound, is now the godfather of Harry, Sir Henry’s son, and offers his help with his friend.

The investigation reveals some fantastic reports. Farmers have revealed that some of their cattle were found dead—killed in the same way as Lady Audrey; and stories begin to surface about a huge moth-like creature being seen stalking across the moor.

This causes Holmes to wonder if Jack Stapleton, the entomologist and the original culprit in The Hound of the Baskervilles, is not dead, as originally thought, but indeed, he may be alive and seeking revenge on Sir Henry with this creature. Stapleton’s wife, Beryl, had disappeared from the area after Jack’s supposed death and a brief romance with Sir Henry.

As Holmes digs further into Lady’s Audrey’s death, he encounters Laura Lyons, a young woman who also had a romantic fling with Sir Henry, until he ended it. Could she be seeking revenge?

Holmes reports to Watson the many events that occurred during his one-week stay, but by the end of the week, although it appears that the problem has been solved, Watson realizes that his friend’s attitude is anything but settled.

Part Three opens with a new crisis when Harry is kidnapped. And a new game is afoot. Now Watson joins his friend on the continuing adventure. The story takes several turns, casts various of the characters as the possible suspects, and the chase to find Harry and his kidnappers moves into the international scene.

Lovegrove has taken familiar characters from a much-loved story and created an intriguing maze with twists and turns and dead ends that all culminate in a surprise ending.

Lovegrove has nailed Doyle’s writing style and takes the reader right back to Victorian England with his words and descriptions. It’s as if the story were written by Doyle himself.

The only drawback to the story is Harry, Sir Henry’s child. Described as a three-year-old, Lovegrove portrays the child more as one a wee bit older by his behavior. But that aside, the story holds water; it’s a fun read; and even the staunchest Holmes fan will scurry through this one and enjoy visiting with old friends.