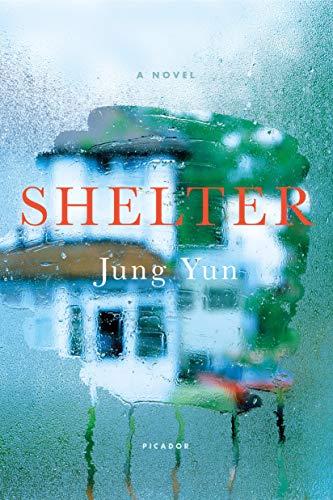 When Kyung Cho, an untenured biology professor, turns the knob on the front door of his parents’ “stunning Queen Anne” house in a wealthy Boston suburb, he is surprised that it’s unlocked. He had expected to find his father, Jin, a far more successful engineering professor, basically hiding after beating up Kyung’s mother, Mae, the way he had abused her throughout Kyung’s early childhood.

That’s only the first of multiple surprises behind multiple metaphorical doors in the engrossing debut novel Shelter by Jung Yun.

Beyond that dramatic opening, Shelter is a story focused first on cultural identity: Jin and Mae are Korean immigrants, while Kyung’s wife, Gillian, is the daughter and sister of Irish-American cops. Author Yun herself was born in Seoul and raised in North Dakota, and she now lives in western Massachusetts, working on faculty development at the University of Massachusetts.

But this is also a domestic and detective tale, and the characters’ tangled and painful relationships go deeper than their ethnicity. This complexity is signaled from the start, as Jin’s history of violence defies clichés about “passive” academics and Asians.

Unfortunately, despite its often exciting gallop, the plotting stumbles. It strains credibility at crucial points, and too many speeches and monologues tumble out in the last 60 pages, explaining too much background, too late, too close upon each other.

The first surprise that Kyung discovers, after he opens his parents’ unlocked front door, is that Mae wasn’t fleeing from another beating by Jin when he discovered her, running and stumbling naked in his backyard. In fact, his parents and their Bosnian-refugee housekeeper, Marina, had been held hostage in their house—beaten, tortured, tied up, robbed, and the two women repeatedly raped—for two days by a pair of meth addicts.

Somehow, Mae manages to escape, although she “had no idea how long she’d blacked out, or how she managed to free herself from her bindings”—one of too many times when the author takes an unsatisfactory, easy escape from explanation.

The main portion of the novel explores the aftermath of this horror and the various ways the major characters react to it.

Understandably, Jin and Mae can’t bear the idea of returning to live in their house. So they and Marina squeeze into the much smaller home of Kyung, Gillian, and their four-year-old son, Ethan, although Mae wants to kick Marina out.

Yet Mae also insists on personally cleaning and inventorying every shred in her wrecked house.

Kyung, meanwhile, uses the new crisis as an excuse to become more of a slacker than ever. He starts smoking and drinking more, and working less.

Other relationships are altered. Jin is unexpectedly gentle and loving with Ethan, even while he continues to criticize Kyung. Gillian’s father, for his part, seems to have gained some sympathy for his son-in-law.

With the close quarters, the tense family history, and the painful new memories, added to Kyung’s and Gillian’s steep money woes, everyone gets increasingly on each other’s nerves, even as no one talks about what’s actually happening. Finally, in the last 100 pages, the pressures build to a crescendo.

That final section spurts out an almost nonstop stream of two types of revelations.

There are insights that should have been at least hinted at much earlier. The author even says as much, as when Kyung muses on his relationship with Gillian: “this person he loved—and he does love her, more than he ever imagined possible—would be better off without him, a thought he’s had so many times before.”

Well, if he’s had those thoughts before, Yun should have revealed them earlier.

Happily, other late-stage revelations involve great plot twists that are well worth waiting for.