Shell Games: A True Story of Cops, Con Men, and the Smuggling of America’s Strangest Wildlife 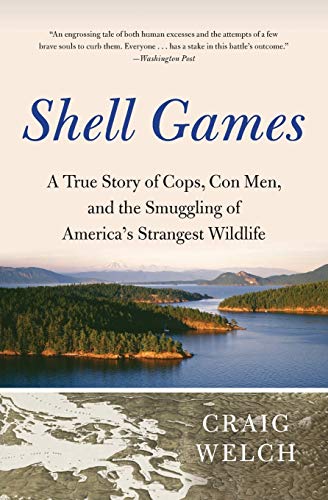 Today, when illegal wildlife trafficking comprises the world’s third largest black market, coming behind only trade in drugs and guns, hunting elephants for ivory, Seattle Times reporter Craig Welch writes in his new book Shell Games, is “horrible, but . . . unfortunately no longer surprising.” Prompting us to not to think of large-scale wildlife crime as something confined to exotic locales, Welch shines his investigative spotlight in his own backyard, on Washington state’s Puget Sound. His subject is illicit trade in obscenely long-necked giant mollusks called geoducks (pronounced “gooey ducks”). The world’s largest burrowing clams, geoducks are such a valuable seafood delicacy—they are particularly popular in South Korea and Hong Kong—that trade in them is tightly regulated. And that means that there’s not only brutal competition among major geoduck traders—competition that involves sabotage, thieves, threats, and even, in rare cases, hit men—but also a flourishing black market for the giant mollusks.           Shell Games offers a rapid and engaging immersion in this strange subculture, through the relationship of Washington Department of Fish and Wildlife Detective Ed Volz and his confidential informant of more than five years, Doug Tobin. Tobin is the sort of paradox the world of wildlife crime engenders—at once a rough-and-tumble fisherman, a convicted felon whose record includes manslaughter, and a sensitive Native American artist who received a $66,000 commission to carve a decorative totem pole for Olympia’s harbor. The larger-than-life Tobin was recruited by good cop Volz, his partner Kevin Harrington, and Volz’s talented but arrogant federal counterpart, Special Agent Richard Severtson, a maverick National Marine Fisheries Service operative so successful at undercover work that a colleague complimentarily refers to him as “a pathological liar.” From 1996 to 2002, the team, led to Tobin after frustrated efforts with other informants, worked closely with the fisherman to dismantle the Puget Sound region’s poaching network and ensnare its geoduck kingpin, seafood broker Nicholas P. DeCourville, who claimed to maintain Mafia ties from his days as a nightclub owner and restaurateur, and conducted much of the illegal seafood trade between the U.S. and Asia from his headquarters in—where else?—Las Vegas. The prudent DeCourville, who brags that he never touched the illegal merchandise himself, finally slips up when he asks for Tobin’s help in hiring muscle to frighten a Puget Sound operator whose refusal to play by the kingpin’s rules is costing him thousands of dollars a week—maybe with a car bomb, maybe with a broken leg. The twist to the story? It eventually comes out that, unbeknownst to his handlers, Tobin, the sensitive Native American fisherman who even collaborates with his law enforcement contacts on an intra-agency film about imperiled ecological resources not only has his own resources, but has also been running his own poaching operation, taking in both clams and crabs, off his boat The Typhoon at least since his second year on the job. When Volz tumbles to the truth, he finds himself setting up a sting to ensnare his own double-crossing informant. At its core, Shell Games is a delightfully offbeat cops-and-robbers story, whose supporting characters include the infamous media hoaxer Joey Skaggs, a hit man who carries a teddy bear, and a homosexual Japanese trader in contraband butterflies nicknamed Yoshi. Shell Games is engrossing enough to read in a single sitting—and incidentally makes an ideal airplane read. Welch claims that he conducted more than a hundred interviews in the writing of the book, and it shows. He makes what could easily come off as the story of one strange case into a peek into a very different underworld—one whose conventions fans of police procedurals will find uncannily familiar. What remains mysterious, though, is just how seriously Welch expects us to take the crimes he chronicles. “It never ends,” Volz remarks to the reporter in the book’s conclusion as he puts Tobin behind him and moves on to another case, “it just changes.” That’s a scene that could well have ended any season of The Wire. And it prompts the reader to wonder, compared to the controversial war on drugs, how much government money are we spending policing contraband wildlife, and what, really, are the social costs of these crimes? By ecologists’ own admission, geoducks are too long-lived for us to be sure about how changes in their population might affect the surrounding ecosystem. I imagine there are cases to be made both for and against stepping up our wildlife policing efforts, and would be curious to read a bit more about them. It’s not quite clear to me what Welch thinks of his material, besides that it makes a swell yarn. And, to be fair—he’s right about that. Reviewer Erik L. Johnson edited mountaineering and adventure literature at W. W. Norton and is currently a freelance writer and editor in New York.