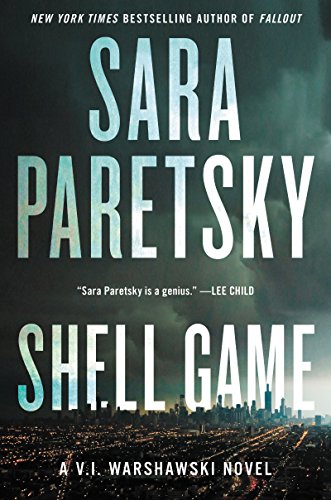 “Shell Game will prompt new readers to scurry back to Indemnity One, so they can catch up on one of the finest examples of a private eye series in the mystery genre today.”

Sara Paretsky burst onto the mystery scene in 1982 with Indemnity One, where she introduced her inimitable detective V. I. Warshawski. Thirty-six years later she launches the 19th book in her series, Shell Game.

Set primarily in and around Chicago, Shell Game places Warshawski smack in the middle of multiple suspects and disparate clues to what appear to be separate crimes: a missing woman and a dead man in the woods.

“The deputy turned without warning into an uncut thicket. Felix and I stumbled after him, following his bobbing flashlight as best we could, the suckers from the bushes and trees snapping back to whip our faces.”

The voyage through the forest ends at the crime scene where a body has been pulled from a hollow tree with Felix’s phone number in his pocket. A dead man who has “been beaten so savagely that his head was a pulpy mess.”

The police believe Felix Herschel to be a suspect in the murder, which compels Warshawski to solve the case. Longtime readers will recognize Felix shares the same last name as another important character in Warshawski’s universe, Lotty Herschel.

Warshawski’s relationship with Lotty makes Felix much more than just a client. “Lotty is my closest friend, my mentor, my conscience.” And Felix just happens to be Lotty’s nephew. He’s also a graduate student from Canada with an interest in the Middle East, a complication that brings in ICE and the looming specter of deportation.

The second case also drags personal relationships into the mix. This time in the form of Warshawski’s ex-husband, Richard, a lawyer who symbolizes a total lack of social conscience.

In the midst of Warshawski’s homicide case, Dick’s niece Harmony Seale arrives in Chicago in search of her missing sister, Reno. Reno disappeared not long after returning from a “business” trip to the Caribbean for a job that Uncle Dick helped her get.

Something terrible happened on the trip, but before Harmony can get her sister to confide in her, Reno vanished. With Dick playing dumb, Harmony turns to “Aunt” Warshawski for help.

Warshawski bounces between the two investigations like a pinball in a tilted machine. It isn’t long before the Russian mob, potential terrorists, and stolen artifacts from Syria complicate the cases, pushing Warshawski further and further into danger.

The plot requires a certain willingness to suspend disbelief. But Paretsky’s writing exemplifies a master at her craft. More mystery than thriller, the story unfolds at a constant pace, but there is plenty of dramatic tension and conflict to draw readers in.

Not to mention appearances by the characters Paretsky has lovingly built over three decades. Characters that followers of the series expect to see. They won’t be disappointed.

While Paretsky does an excellent job of making Shell Game a standalone, readers may wish to have read the previous Warshawski novels.

If nothing else, Shell Game will prompt new readers to scurry back to Indemnity One so they can catch up on one of the finest examples of a private eye series in the mystery genre today.