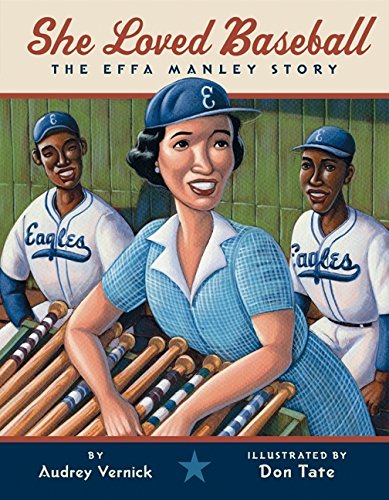 This historically accurate book, a real gift to children, explains the effective and admirable life of Effa Manley, the first important female baseball clubowner. Although a woman named Helene Britton inherited ownership of the St. Louis Cardinals and ran it for several years in the teens, Britton had less impact on the world of baseball than did Effa Manley, whose leadership helped young black men display their baseball talent.

Manley and her husband Abe operated the Newark Eagles jointly in the Negro National League from 1936 to 1948, and after the death of her husband Effa in 1952 took complete charge with a firm hand. She assumed a motherly interest in her players and took good care of them.

The author of this book, Audrey Vernick, offers appropriate details to demonstrate Manley’s hands-on work with her club and the way her players respected her. Vernick might also have mentioned Manley’s guidance in their personal lives; as Jean Ardell points out in Breaking into Baseball (2005), Manley persuaded her players to “dress well, pay their bills, and live respectably.” Her wise advice helped the club gain the approval of the people of Newark.

Vernick adds information about a few of the Eagles’ well-known players, some of whom later made the Hall of Fame with the help of Manley’s persistent promotional letters. Franklin Lewis, in his 2006 book, The Cleveland Indians, says when owner Bill Veeck became interested in Larry Doby, he ultimately paid the Eagles $15,000. Black clubs were being destroyed, but at least the players were finally getting the opportunities they were entitled to. As Vernick writes, “Doby became the first black player in the American League.”

Most people who know about Effa Manley’s contribution to baseball have no idea of her successful activism for people of color outside the national game. Participating in the famous campaign, “Don’t Buy Where You Can’t Work,” Effa Manley worked tirelessly to persuade the white business owners of Harlem to hire black salesclerks. Vernick’s inclusion of this information in She Loved Baseball extends the biography beyond Manley’s baseball accomplishments to give us a well-rounded picture of Manley.

This book is a valuable contribution to published works on women in American history. It could have been even better with more attention to the requirements of young readers. If Vernick had consulted a reading specialist or an experienced children’s book editor, she would have avoided pitfalls that editors are used to correcting, such as starting a page with a pronoun, “They,” because children often cannot recall antecedents from a previous page. She would not have started a page with the passive voice, “There was,” a locution that is meaningless to young children. She would have eliminated use of the word “it” when it had no antecedent (“She talked to the press and made people think how unfair it was”—what was?—and “It all came down to one final Negro League World Series game”—what all came down to that game?), and she would have eliminated use of the so-called “empty it” (“On Effa’s gravestone it says”—what says?).

I see other pitfalls, too. Late in the book Vernick refers to Manley’s “civil rights work,” but earlier, when discussing Manley’s campaign for jobs in Harlem, she omits to use and explain the adult term “civil rights.” And when Vernick refers to the Hall of Fame, after her first reference to it she repeatedly calls it “the hall,” lowercased instead of capitalized. Vague, unclear writing confuses children, especially when they are learning to read.

The problems in Vernick’s writing are minor and would be easy to clear up. Solving them would make an important story easier for children to understand and would be worth the effort. Written for children five to ten, the book should interest that age group, and the older children will try to read it themselves if they encounter no comprehension blocks. Attractive and appropriate art by Don Tate illustrates this book.