She Kills Me: The True Stories of History's Deadliest Women 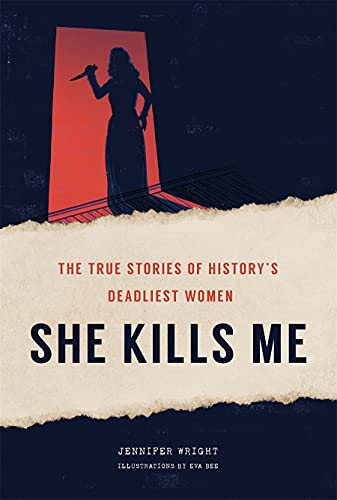 “Wright has done substantial reference on her subjects and skillfully taken large amounts of information and boiled it down to readable facts and comprehensible material.”

It’s always nice to see women get true recognition for their efforts in life, although Jenifer Wright’s book, She Kills Me: The True Stories of History’s Deadliest Women could bring that recognition into question.

She Kills Me is an anthology of short nonfiction histories that discusses some of the activities of the most famous—or infamous—female killers dating as far back as Tomyris, Queen of the Massagetae (ca. 600 BCE) up to Linda Calvey (1948–present).

Each section covers five or six women who fit the category, and each section is followed up with an overview: How to Spot a Psychopath, Poisoning Husbands, Female Cult Leaders, Divorcing, Breaking Up, The Female Path Toward Independence, Quotations, and Rebellions Led by Women.

Regardless of their fame or familiarity, each woman’s story is a fascinating (albeit short) read, and educational—especially for any woman looking to do away with a pesky husband, annoying ex, disturbing neighbor, or even, yes, a wayward misbehaving child.

Motives often play a part in these stories, for example, Leonarda Cianciulli (1894–1970) found herself in a position where “She believed that in order to spare her son, she could sacrifice another life. Perhaps to be on the safe side, however, she sacrificed three lives. This strikes me as somewhat overenthusiastic, but then, I have never participated in any human sacrifice ceremonies.” Leonarda was ultimately “sentenced to thirty years in prison and three in a criminal asylum . . .” so she did not get away with murder.

And there was Laura Fair (1837–1919) who found herself involved with a married man who would not divorce his wife, so she shot him! This was a time when women’s rights advocacy was raising its head and many advocates “were quite firmly on Laura’s side.” New York Tribune journalist at the time, Jane Swisshelm, declared, “if all such men were shot tomorrow . . . the world would sustain no loss.” Although found guilty initially and sentenced to death, she eventually was granted a new trial and received a not guilty verdict. A “grim warning to men. Don’t lie to women. Especially for a full seven years.”

As Wright discusses in her chapter about Killer Queens, “If you learn anything from these chapters, it’s that men are gaga for women who successfully lead armies that kill a ton of people.” Certainly, a fair warning to men not to underestimate strong women.

Perhaps parentage should also be a warning. In her section on Killer Queens she details the horrific actions of “Bloody” Mary I of England upon her ascension to the throne. An avid Catholic, Mary was determined to reverse her father’s actions against the Catholic Church. Her response to his previous actions was “by leaning into the Catholic Church faith. Doing so served both as a middle finger to the father who had disowned her and a way to maintain a connection to her mother’s Spanish family.”

Although the idea of such murderous woman can send chills up the spine, Wright loads She Kills Me with small bits of humor. Perhaps this is her way of lightening the topic, and it works well.

Wright has done substantial reference on her subjects and skillfully taken large amounts of information and boiled it down to readable facts and comprehensible material.

She Kills Me is an evening—at most two days—of reading. And it gives women who find themselves in untenable situations something interesting to think about!