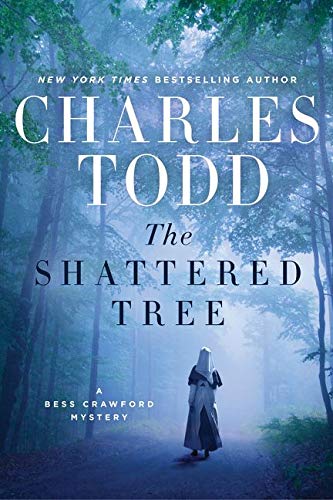 “The Shattered Tree is an enjoyable and quick read—well worth the time.”

In The Shattered Tree, there is a sense that author Charles Todd is bringing World War I to a close and possibly opening new opportunities for heroine Bess Crawford to put her detecting skills to good use.

The Shattered Tree opens in October 1918 just as rumors fly around that the war is coming to an end. The story opens as a man, battered and beleaguered by the ongoing effects of war, is found at the foot of a shattered tree, unconscious and near death.

Unknown, his French uniform tells his rescuers he is in the French army, although any other indications of his identity seem lost. Sister Bess Crawford tends to his wounds and notices that his feet, in particular, are bare and shredded because he has no shoes.

Bess rushes into a trench at the front to help a soldier, and while there she is injured as a result of a sniper shot. She is tended to as best she can be, but is sent to Paris for recuperation before returning to the front.

While in recovery, her mind focuses on her shoeless patient; she encounters him in a state of nervous energy during his convalescence and she overhears him speaking in German. Her curiosity is piqued. Why would a French soldier be speaking German? There are many possible answers to that question but Bess can’t quite get her hands around a suitable one.

The man disappears, and Bess learns from one of her sister nurses that he gave his name as Philippe Moreau, and sensing more to the story, she follows an urge to locate him and determine why he spoke German. During her own recovery from the sniper wound, Bess encounters an old friend, Captain Barkley, an American in the Canadian Army who mysteriously appears and is drawn into helping her in her quest.

The deeper she digs into Philippe’s background the more devious his character appears. A brutal attack on a nun, another sister nurse, uncovers connections to Philippe. The police have identified who they think is the perpetrator of the attack, but the nurse insists they are wrong, and Bess finds herself following red herrings and dead ends. And yet each path runs parallel to the mysterious Philippe Moreau.

A court martial and an 18-year-old unsolved murder add layers to Moreau’s history, and yet each new twist and turn in her search is not quite what it seems to be. Moreau’s history paints him as a monstrous murderer and traitor, but as Bess pulls back each layer, she questions whether this picture is accurate.

For followers of the Bess Crawford Mysteries, the many paths she follows are entertaining and engaging. Todd brings the ending of The Shattered Tree to a conclusion that seems too convenient, and there is a sense that several clues and foreshadowings are not quite tied up as they should be. There is a sense that this story is not laid out with the precision of previous Bess Crawford Mysteries. The story at times seems to be a bumpy road to a somewhat expedient ending.

Having said that, it should be noted that Todd has nailed the era in which the story is laid out, with precision and clarity. Bits and pieces of history are neatly woven through the plot. From beginning to end, the characters are well developed; the narrative gives transparency to the flow of the story; the description with the use of the five senses puts the reader in the right place at the right time.

There is only so much you can do with a time frame that comes to an end, and it is clear that Bess Crawford, as she comes to the end of her war work, will be looking forward to new mysterious events in her new life. As will her fans.

The Shattered Tree is an enjoyable and quick read—well worth the time.