Shark Tales: How I Turned $1,000 into a Billion Dollar Business 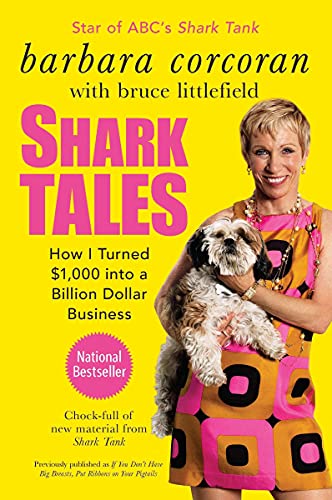 “Ms. Corcoran is proof that sometimes the best business sense is simply common sense—and a little imagination and chutzpah can go a long way.”

Expecting more of a savvy business book, I quickly discovered that Shark Tales was an entirely different animal. Despite its current facelift, which includes examples and lessons learned from Barbara Corcoran’s current stint on the popular television show “Shark Tank,” the book still remains true to its previously published title: If You Don’t Have Big Breasts, Put Ribbons on Your Pigtails: And Other Lessons I Learned from My Mom.

Barbara Corcoran is the second of ten children. Living on the main floor of a modest house with two bedrooms and only one bathroom, there’s no doubt that young Barbara learned important people skills early on; however, it was of interest to note that Ms. Cororan’s phenomenal success was definitely not a path foretold by her elementary school years. Not only did she earn straight Ds on her report card, but she also wrestled with the challenges of dyslexia—no doubt a contributing factor to her grades.

Apparently it was the infinite patience of her mother that helped Barbara and the other children through their tough times, such as when a nun at school called Barbara “stupid.” An even more valuable lesson was learned when one of her brothers was being bullied by a larger child. The senior Mrs. Corcoran solved the problem by explaining that a bully needed to be bullied right back—and simply deployed another child to take care of the problem. This single lesson was worth its weight in gold when Ms. Corcoran put it into action many years later when she sued big bully Donald Trump after he tried to cheat her company out of a $4 million commission.

Though the statement that she turned $1,000 into billions is a rather loose interpretation of the facts—not to mention that the 1970s constituted an entirely different business atmosphere, and that the 1980s to early 1990s were the heydays of real estate—which simply adds to the mysterious void of redacted details. Yet despite her entrepreneurial good timing, there’s no denying that it was Ms. Corcoran’s steadfast determination and creative, out-of-the-box thinking that made her the success story that she is today.

Written as more of an inspirational tool than a business how-to, Shark Tales: How I Turned $1,000 into a Billion Dollar Business takes a different approach to doing business. Despite the focus on real estate, Ms. Corcoran’s ideas and strategies can be applied to any type of business.

By employing the life lessons she learned at the patient hand of her supermom, Barbara Corcoran conquered every obstacle that blocked her path to success, whether it was finding a creative way to sell 82 run-down, unwanted apartments, or making personal sacrifices in order to keep her sales agents employed. Ms. Corcoran is proof that sometimes the best business sense is simply common sense—and a little imagination and chutzpah can go a long way.