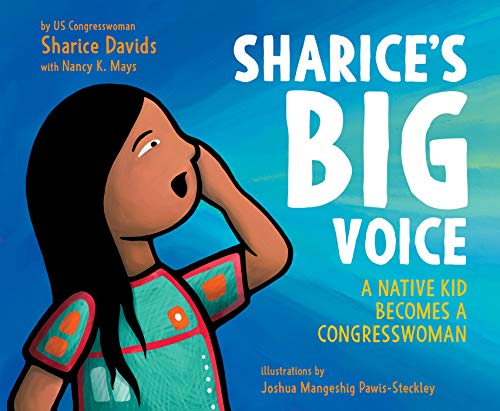 A powerful #ownvoices #livedexperience autobiographical picture book, Sharice’s Big Voice: A Native Kid Becomes a Congresswoman is the story, told in reverse chronological order, about how and why Sharice Davids became one of the first two Native American Congresswomen in this country. Taking a rather humble position, Davids emphasizes in her Author’s Note that this is really “our” story—“That each of us has our own path—and the most important thing in the world is to be true to your own journey.” In this story of empowerment, Davids (and her co-writer Nancy K. Mays), encourage readers to see her particular path as an example of what is possible in anyone’s life—“you get to decide what success means for you.”

Davids makes it clear from the outset. “I heard from lots of doubters. They thought I couldn’t win based on what I look like, who I love, and where I started.” Though somewhat didactic at times, the message to young children is consistent throughout the book, “Everyone’s path has obstacles—some more than others; everyone faces challenges and people who doubt them. (Sometimes we even doubt ourselves!). Everyone’s path looks different.” Davids’ mantra is about being fearless, and she wants readers to follow suit: It’s okay to be afraid of new challenges, do it anyway, and you’ll see what doors can open up as a result.

As a younger child, Sharice’s Big Voice reveals how much Davids liked to talk to people—like her mother and kids at school (but in class she would sometimes get in trouble for chatting). Raised by a single mother serving in the Army, Davids moved a lot—Germany, Kansas, Missouri. Repeatedly meeting new kids meant she had to figure out how to have conservations that broke down walls, and she got good at it. In these spaces, Davids also learned the importance of listening to others. “I learned that listening gives people room to be themselves.”

But school was also a place where Davids encountered microaggressions like when kids  (disrespectfully) asked, “What are you, Sharice?” At one point her mom told her “You’re Native American . . . We’re members of the Ho-Chunk Nation.” (The Ho-Chunk Nation is also called People of the Big Voice—which suited Davids just fine!) Davids also learned about discrimination from her mother, who as a young girl “was removed from her family and told to pretend she wasn’t Ho-Chunk.” Moreover, her mother told her, “We used to be all one people, but long ago, the US government forced tribes to move away from their homelands.”

Davids grew up looking up to her mother, and she was determined to be like her: “Focused and Fierce. Confident and Kind. A person who serves others.” Emulating her mother, Davids worked hard and spent her childhood and adolescence selling newspapers, working in food service, and cleaning bathrooms. Learning martial arts as a kid and then as an adult taught Davids to be strong and fierce, too. She experienced firsthand that to get better at something she had to practice and not be afraid of new challenges. This helped her in deciding to go to law school (in a program with fellow Native Americans)—which she chose to do “so I could work to make our US laws more just and fair.”

Following law school, Davids worked for a big law firm, but that didn’t feel right to her. She moved to a South Dakota reservation to help indigenous people start new businesses and eventually worked in the White House “but I didn’t see people who looked like my family. I didn’t see people who’d grown up like me.” That’s when she realized, “What if everyone’s voice was heard by the people making our laws?”

Davids wanted everyone’s voice to be heard, and “That’s when I had a bold, brave idea that would need my big voice, my ability to listen, and my ability to take a punch.” So she ran for US Congress. When she won, also becoming the first lesbian representative in Kansas, she exclaimed, “I felt like everyone—every voice—was rising up with me.”

Beautiful and bold digital illustrations by Joshua Mangeshig Pawis-Steckley, an Ojibwe Woodland artist and member of Wasauksing, First Nation are a modern interpretation of the Woodland art tradition. In his Artist’s Note, he states, “We come from generation upon generation of being silenced, being made to conform to a culture that is not our own.” His artwork showcases Davids’ resilience and determination “as a historically and culturally significant success story for all young people.” Backmatter written by Jon Greendeer, former president of the Ho-Chunk Nation, tells the history of the Ho-Chunk Nation, focusing on the language, the Ho-Chunk clan system, tribal history from the 1800s onward, and their warrior tradition.

Sharice’s Big Voice: A Native Kid Becomes a Congresswoman is a testimonial to hard work and perseverance. Throughout the story, Davids imparts to young readers wisdoms about life, “Be open to challenges. Work hard and you’ll learn a lot. Listen to people. (Not the doubters!) Use your big voice to fight for your beliefs.” Ultimately, it’s a rally cry to all, particularly underrepresented people, to use your big voices, “You deserve to be seen—and heard.”